Justin Thomas is just three shots behind Viktor Hovland with one round remaining at the World Wide Technology Championship. 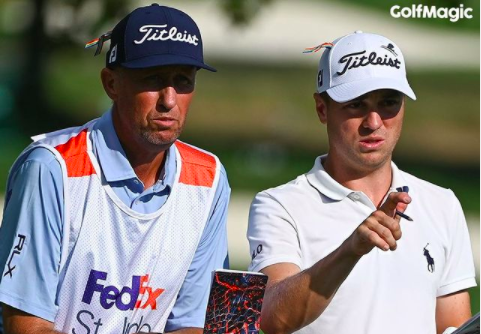 The relationship of Justin Thomas and Bones Mackay is beginning to flourish on the PGA Tour as he shot a crucial 7-under-par 64 on Saturday.

Thomas is just three shots behind Viktor Hovland in Mexico, who is looking to become the first person ever to successfully defend their title from the previous year in Mayakoba.

Thomas was particularly pleased with the hard work of Mackay, who arrived a day early at El Camaleon Golf Club last Sunday to put in extra preparation.

This brought a smile to the face of the 14-time PGA Tour winner and he believes the pair are becoming more comfortable together on the golf course.

"This is a new season. Completely different. Especially with (Mackay) it kind of feels like it’s a new start," Thomas said after the third round.

"I think the more rounds we have and the more times that we play and spend time on the golf course, he’s getting used to that to where he feels more comfortable, maybe, stating his opinion, if you will."

After Team USA's historic victory at the Ryder Cup, Thomas' previous caddie Jimmy Johnson informed him that was stepping down from his bag.

Mackay, who caddied for Phil Mickelson for 25 years, immediately accepted Thomas' offer and he will now carry and also fulfil some course-reporting duties for NBC and Golf Channel, a role he has had since 2017.

The 56-year-old has previously stepped in for Thomas' caddie Jimmy Johnson before, the first time being at the 2018 Sony Open when Johnson was injured.

Bones also stepped in when Johnson was injured during the WGC-FedEx St. Jude Invitational in 2020, which Thomas won by three strokes. Johnson first caddied for Thomas in 2015.

NEXT PAGE: BONES MACKAY TO CADDIE FOR JUSTIN THOMAS IN 2021/2022 PGA TOUR SEASON