The tournament will be played at the Fire course at Jumeirah Golf Estates. 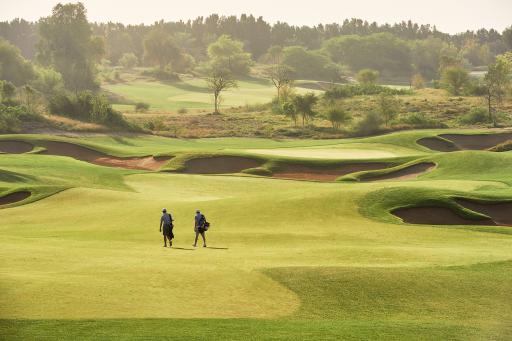 The European Tour has added the AVIV Dubai Championship to its 2021 schedule.

It means that the tournament will be returning for a second year, forming a double header with the DP World Tour Championship.

The prize pool is $1.5million and will be played at the Fire course at Jumeirah Golf Estates from 11-14 November preceding the final Rolex Series event of the year.

The DP World Tour Championship will bring down the curtain on this year's race to Dubai on the neighbouring Earth course.

It was introduced last December, when it was known as the Golf in Dubai Championship by DP World, as part of the revamped 2020 European Tour schedule, where Antoine Rozner won by two strokes.

Jon Rahm wins the Race to Dubai after securing the DP World Tour Championship with a birdie on 18!

This year it will be sponsored by AVIV Clinics. It replaces the cancelled Nedbank Golf Challenge hosted by Gary Player in South Africa, which will be back next year.

It forms a new-look end to the European Tour's 2021 season following the recent additions of the Mallorca Golf Open and Portugal Masters.

Players in those two events and the AVIV Dubai Championship will be aiming to secure their spot in the $9million DP World Tour Championship, which will comprise the leading 50 players on the Race to Dubai.

Keith Pelley, the European Tour's chief executive, said: "Last year's tournament on the Firecourse, created to complete our 2020 schedule, was a great success and we are delighted to bring the AVIV Dubai Championship to our schedule as the final piece in our jigsaw this season."

NEXT PAGE: G-MAC IS BACK AND RARING TO GO AT SHRINERS