Viktor Hovland had to withdraw from the US Open with an eye injury, but he is back this week at the BMW International Open on the European Tour. 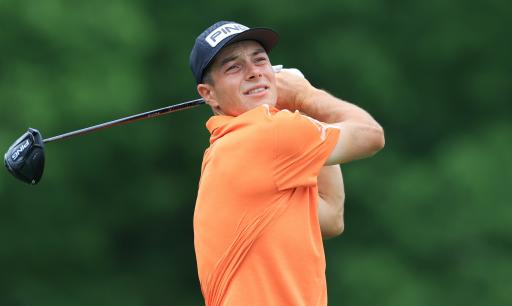 World No. 14 Viktor Hovland is back from his eye injury and is competing at the BMW International Open on the European Tour.

In a round that was delayed by the threat of lightning, Hovland was one of those to complete his first round on Thursday, carding 4-under-par.

Although the young Norwegian made a bogey at the par-3 2nd hole, he bounced back with a birdie at the par-4 5th hole and a fantastic eagle at the par-5 6th hole.

Hovland added three more birdies to finish with a 68 to sit three shots behind a group of four players who lead on 7-under-par. His round was arguably highlighted by a spectacular recovery shot out of water, which required the 23-year-old to take one shoe and one sock off.

Viktor Hovland: A man with all the shots #BMWInternationalOpen pic.twitter.com/iaVFxyBweX

While practising at Torrey Pines in San Diego last week, Hovland caught some sand in his eye and despite attempting to play through the pain, he withdrew from the US Open in the second round.

RELATED: VIKTOR HOVLAND WITHDRAWS FROM US OPEN WITH INJURY BUT SAW THE BRIGHTER SIDE

Hovland is three shots behind Wade Ormsby, Sam Horsfield, Masahiro Kawamura and Sebastian Garcia Rodriguez on 7-under-par, but the only one to finish his round at Golfclub München Eichenried in Munich of this group was Ormsby.

The Englishman Horsfield will have an opportunity to take the solo lead when play resumes on Friday morning, as his round finished just after he approached the 18th green in Munich.

Two-time BMW International Open winner Pablo Larrazabal is just one shot behind the leaders on 6-under-par after carding an impressive 66.

NEXT PAGE: ENGLAND AND ARSENAL STAR BUKAYO SAKA TURNS HIS HAND TO GOLF!