Sean Crocker, Nicolai Hojgaard, Min Woo Lee and Wilco Nienaber broke the record for the ' Fastest holes of golf by a team of four'. 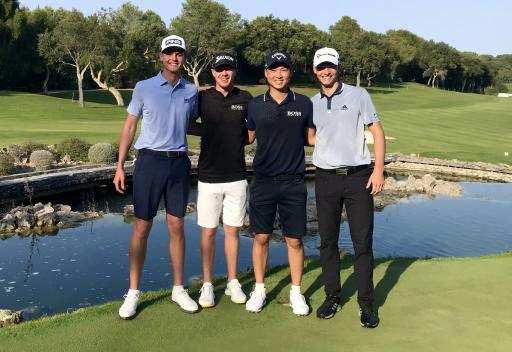 Five years on from originally breaking the record, the European Tour returned to the fourth hole at Real Club Valderrama for the second Hero Challenge of 2021.

Filmed on Tuesday, October 12, 2021, ahead of the Estrella Damm N.A. Andalucía Masters, Crocker, Hojgaard, Lee and Nienaber were challenged with attempting to better the extremely demanding existing record of 27.88 seconds, set by an American team in 2018.

Nienaber hit an enormous 361-yard drive off the tee which gave Crocker, positioned in the fairway, 140 yards for his second shot which he hit to four feet, where Lee and Hojgaard were waiting to finish things off on the green.

RELATED: GOLFER EARNS LPGA TOUR CARD DESPITE PENALTY FOR HAVING HER CHILD'S 7-IRON IN BAG

After a nervous wait, the record-breaking time of 24.75 seconds was confirmed, sparking exuberant celebrations from the four players.

This was then bettered a year later by a four-man team from England (Ian Poulter, Tyrrell Hatton, Matthew Fitzpatrick and Matthew Southgate) in Turkey, who set a time of 32.70 seconds at night under floodlights.

In 2019, Thomas Detry set an astonishing new Guinness World Record title for the ‘Fastest hole of golf by an individual’, playing a par-5 hole in just one minute 29.62 seconds at Real Club de Golf Guadalmina also in Spain.

Earlier this year, Marcus Armitage hit the ball 303 yards down a runway in York, UK into the front passenger seat of a moving BMW M8 convertible to take the Guinness World Record title for the 'Farthest golf shot caught in a moving car'.