Rickie Fowler is on the brink of winning on the PGA Tour for the first time since the Waste Management Phoenix Open in 2019. 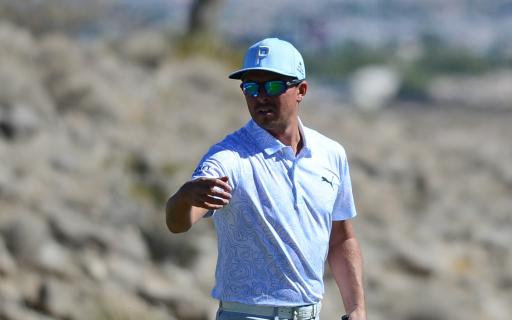 Rickie Fowler admitted he hadn't been at the top of a PGA Tour leaderboard for a long time after his scintillating third round at the CJ Cup.

The 32-year-old shot a fantastic card of 63 on Saturday to reach 21-under-par for the week. He is two shots clear of old foe and career-long friend Rory McIlroy.

It is his first 54-hole lead on the PGA Tour in over two years, but having paid a visit to former coach Butch Harmon before the tournament began, it seems he has been rejuvenated.

Fowler hit all 18 green at The Summit Club yesterday for only the third time in his career. He made nine birdies on Saturday he has only made one bogey in three rounds in Las Vegas.

"I've done everything I really wanted to do the first three days," Fowler said after his third round.

Alone at the top.

Three birdies in the last five holes to give @RickieFowler the outright lead. pic.twitter.com/wquqk4Q0Wc

"It’s nice to be executing the way we are. I say ‘we,’ it’s a two-man show out there, Joe (his caddie) and myself, and ultimately I’m the one pulling the trigger.

"It’s just been a long time coming. I haven’t been in this position a whole lot in the last couple of years, so to feel the emotions again on the back nine being around and then in the lead.

"Kind of dealing with that again and kind of making sure that I was going through the right process and committing to what I was ultimately trying to do, it was great to see that I was still executing and hitting the shots that I wanted to."

The five-time PGA Tour winner only achieved one top-10 finish last season and he failed to qualify for The Masters and the US Open.

He has plummeted to World No. 128 and he also missed the FedEx Cup Playoffs for the first time since 2009. These facts just do not match up with such a talented player.

With rounds of 66, 66 and 63 at The Summit Club, it has been as well as Fowler has played for years. With the likes of McIlroy, Abraham Ancer and Adam Scott breathing down his neck, he will have to prove his metal to achieve a fantastic bounce-back win.

NEXT PAGE: WHO NEEDS A PGA TOUR WIN MORE BETWEEN RORY MCILROY AND RICKIE FOWLER?