Garrick Higgo shot a final-round 63, finishing on 25-under-par to secure victory by three shots at the Meloneras Golf Club. 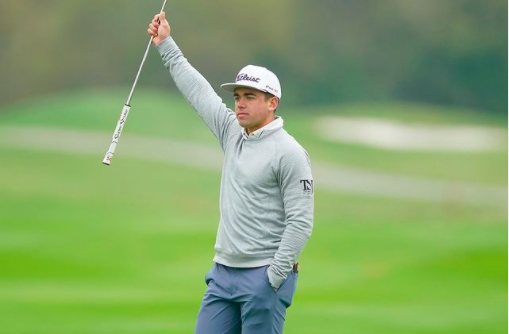 Garrick Higgo secured his second European Tour title, shooting 7-under-par in the final round at the Gran Canaria Open.

The South African entered the final round at Meloneras Golf Club with a two-shot lead, after he shot another 7-under-par 63 on Saturday.

Higgo began on Sunday in a similar fashion by making a birdie on the par-4 second hole and then an eagle on the par-5 4th hole to extend his advantage.

The 21-year-old, who averaged 335.5 yards off the tee on day three, added four more birdies including one at the 18th hole to finish on 25-under-par and three ahead of Maximilian Kieffer.

Showing off that wedge game

Higgo sealed his first European Tour victory at the Open de Portugal in September 2020 and after a tied fourth finish at the Austrian Open last week, he has now doubled his career tally.

Kieffer agonisingly lost in a playoff at the Austrian Open to John Catlin and he finished second again this week on 22-under-par.

Kieffer shot 62 in the final round, including seven birdies and an eagle on the par-4 10th hole on his way to an 8-under-par round, but it wasn't enough for the 30-year-old.

Jeff Winther, who is yet to win on the European Tour, shot a 62 of his own in the third round at Meloneras Golf Club and began the day three behind Higgo.

The Dane made four birdies on the back nine and also eagled the par-5 18th hole, but bogies at the 10th and 15th holes ultimately meant he couldn't reach Higgo on 21-under-par.

Englishman Sam Horsfield has won twice on the European Tour and finished fourth at the Gran Canaria Open on 19-under-par, with a final-round score of 4-under-par.

NEXT PAGE: GREEN SPEEDS: WHAT'S THE QUICKEST GREEN YOU HAVE EVER PUTTED ON?

Previous
Green speeds: What's the QUICKEST green you have ever putted on?
Next
Cameron Smith and Marc Leishman come out on top to WIN the Zurich Classic