Jon Rahm is still in hot pursuit of history in Spain as he sits just one shot behind Wil Besseling after 36 holes. 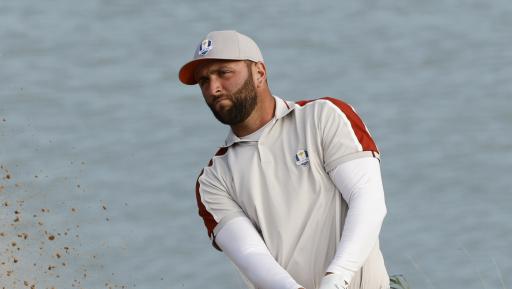 Jon Rahm is well in contention to win the Acciona Open de España for the third consecutive year after a 4-under-par 67 put him in second place after 36 holes.

The World No. 1 is just one shot behind Wil Besseling on 12-under-par. Rahm loves playing golf in his home nation and he showed this once again in Madrid on Friday.

Starting two shots behind course record-breaker Ross McGowan after the first round, Rahm kept his foot on the gas with birdies at the 2nd and 9th holes at Club de Campo Villa de Madrid.

He moved to 10-under-par for the tournament and he then eagled the par-5 14th hole for the second consecutive round. Despite a bogey on the 16th hole, he bounced back with another birdie on the final hole.

RELATED: ONE AND DONE: CHAMP JOINS TIGER WOODS ON THE INJURY LIST AND IS OUT FOR THE YEAR

The US Open champion finished with a 67 and sits on 12-under-par, one shot behind the Dutch Besseling, who shot a steady 65 of his own in the second round.

If he was to win this tournament, he would become the first player to win an event on three consecutive occasions on the PGA Tour or European Tours before the age of 27 since Tiger Woods.

Besseling is yet to win on the European Tour but he hasn't made a bogey yet in 36 holes at the Acciona Open de España. Rounds of 7-under-par and 6-under-par mean he sits pretty at the top of the leaderboard.

As for McGowan, he could not match the quality of his first round on Friday. A conservative score of 1-under-par dropped him two shots off the lead heading into the weekend.

RELATED: SPORTSWASHING: IS IT RIGHT SAUDI ARABIA IS TAKING OVER GOLF AND FOOTBALL?

Cabrera-Bello, a winner of three European Tour events, is a further shot back on 10-under-par and the experienced Larrazabal is four shots behind on 9-under-par.

european tour
jon rahm
Tiger Woods
Acciona Open de España
madrid
Previous
One and done: Champ joins Tiger Woods on the injury list and is OUT for the year
Next
Sam Burns has Ryder Cup on his mind as he contends at Shriners Hospitals Open