Although the World No. 1 shot a better score than the first round in Spain, he won't be playing at the weekend at Valderrama. 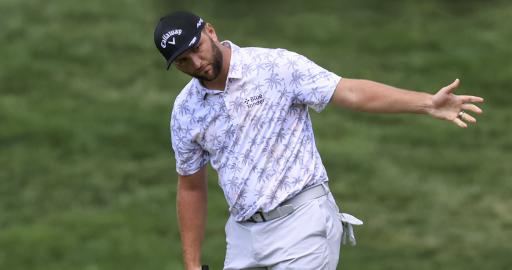 World No. 1 Jon Rahm has missed the cut at the Estrella Damm N.A. Andalucía Masters, finishing 10-over-par after two rounds at the treacherous Valderrama.

The writing was on the wall for Rahm after the first round when he shot 7-over-par, but he failed to recover and he only managed two birdies in 36 holes in Spain.

The Spaniard, who stuck around to sign autographs for his adoring fans after yesterday's calamity, began with two bogeys in his first three holes on Friday.

He was 4-over-par on the front nine and all hope of making the cut was gone. He made his second birdie of the week at the 14th hole but he finished with a 74.

When you get that first birdie of the week

Rahm only missed one cut on the PGA Tour last season, which was at the Wells Fargo Championship in May, and he was one of many big European Tour names to fall by the wayside this week.

Impressive Italian Guido Migliozzi finished on 14-over-par after 36 holes at Valderrama. Richard Bland missed the cut by three shots on 8-over-par and Thomas Pieters missed out on the cut by one shot on 6-over-par.

At the other end of the leaderboard, just 12 players have managed to finish under par at the close of play on Friday. Frenchman Romain Langasque leads the way by one shot on 4-under-par.

The World No. 282 made a fantastic eagle at the par-5 17th hole which was the highlight of his second-round 69. Englishmen Matthew Fitzpatrick and Laurie Canter are one shot back on 3-under-par.

Canter shot an incredible round of 65 in Spain, making seven birdies. The front-nine average scoring on Friday was 36.29, but Canter played it in just 30 shots.

Rafa Cabrera-Bello, winner of the Acciona Open de España last weekend, made seven bogeys on Friday at Valderrama to fall back to level-par, four shots behind Langasque.

NEXT PAGE: RORY MCILROY ADMITS KEITH MITCHELL IS "A HELL OF A PLAYER"