Maverick Antcliff and Matthew Southgate co-lead at the Porsche European Open on 5-under-par with one round remaining in Germany. 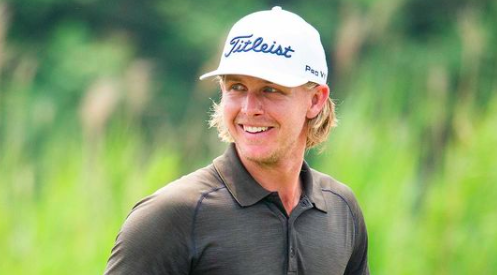 Maverick Antcliff and Matthew Southgate share the lead on 5-under-par at the Porsche European Open, heading into the final round on Monday in Germany.

Antcliff, who finished second at the Canary Islands Championship in May, began the day three shots behind first-round leader Thomas Detry but the leader could only shoot 1-over-par on day two.

The Australian has been extremely consistent in the first two rounds at the Green Eagle Golf Courses in Hamburg and he fired a round of 4-under-par on Sunday, including five birdies.

The World No. 213 almost made a hole-in-one on the par-3 17th hole as his ball rolled just short of the cup, so he had to settle for a tap-in birdie.

His 68 took him to the top of the leaderboard with Southgate who shot a 69 of his own in round two. The 32-year-old, who finished tied sixth at the 2017 Open Championship, is still looking for his first win on the European Tour.

Defending champion Paul Casey had a disappointing first round in Germany on Saturday when he shot 75, but a round of 3-under-par in the second round has given the Englishman a glimmer of hope.

The World No. 21 made five birdies and two bogeys in his second round to finish in level-par for the tournament and five behind Antcliff and Southgate.