Rory McIlroy and Jon Rahm SHOCKED as golf punter strolls onto the 10th tee to play with McIlroy's club! WATCH THIS... 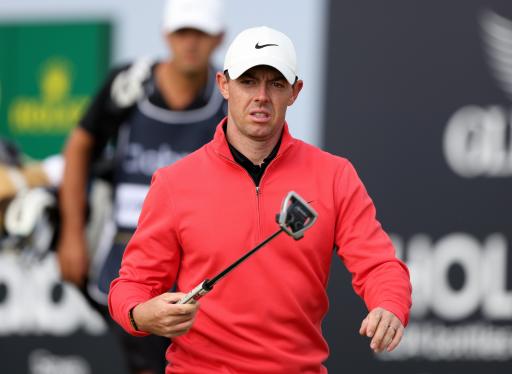 During the second round of the Scottish Open, a random man walked on to a tee box and stole a club out of Rory McIlroy's golf bag.

McIlroy and his playing partners Jon Rahm and Justin Thomas appeared to be on the 10th tee box, ready to begin their second round at the Renaissance Club.

In what was a completely bizarre turn of events, a random man walked on to the tee box and took a club out of McIlroy's bag and took it to the other side of the tee box, in footage posted by Duncan Carey.

WATCH: GOLF FANS REACT TO RANDOM MAN KNICKING RORY'S CLUB BEFORE BEING TAKEN OUT BY SECURITY!

He attempted to take the Northern Irishman's driver but after pulling the headcover off, he took an iron out of his bag instead.

McIlroy, his caddie Harry Diamond and Rahm could not believe what they had seen as they looked on in bewilderment. As the footage continues, Diamond is pondering what to do as the man remains stood on the tee box, but unfortunately, it's unclear what happened thereafter.

It is a situation that we have almost never seen before and it will surely raise security concerns at the Scottish Open, as no spectator should be able to just stroll on to a course and steal one of the player's clubs.

The manner in which the random man is able to casually walk on to the tee box at the North Berwick venue must be addressed and it is spectator behaviour that should never be tolerated.