Rory McIlroy rips his shirt in RAGE and this is how fans reacted: "He blew it"

The Northern Irishman took out his anger on his shirt and this is what golf fans thought of it. 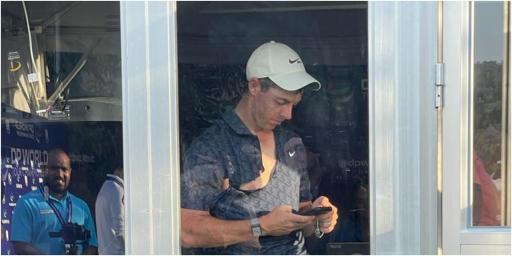 Rory McIlroy is the sort of player who always wears his heart on his sleeve.

Whether it's in the Ryder Cup, trying to claim a major or trying rack up another win on the PGA Tour.

McIlroy cares. He's snapped clubs in the past and has been heard getting frustrated with himself after hitting poor shots.

As ever with the 32-year-old Northern Irishman, there are ups and downs.

The ups? They are amazing. For the majority of last week at the DP World Tour Championship he was stunning.

He shaped shots and excitedly beamed to reporters: "I feel like I've got my game back"

But disaster struck in his final round at Jumeirah Golf Estates on the 15th hole of the Earth Course.

McIlroy's wedge approach was perfect. Too good, in fact. The ball smashed off the flag stick and left him in a poor position.

He couldn't scramble to make par and then duly made another bogey at the next.

And then that - as they say - was that. McIlroy won twice in 2021 but this was largely a forgettable year.

He salvaged some much needed personal pride with a victory against Xander Schauffele at the Ryder Cup. But an emotional McIlroy broke down at Whistling Straits and said he wished he could have done more.

McIlroy appeared to let the frustration get the better of him again in Dubai. He was spotted with a large rip through his Nike shirt. We can only assume he did it in a fit of rage.

This is how fans reacted on our Facebook page:

Have him spend a day watching me hack up a course and he'll snap right back.

He's not had another meltdown has he? I'm shocked to my core.

One fantastic shot which worked out unlucky, it happens to all golfers.

Maybe he was looking for his Superman shirt underneath this one?

We've all felt like that after a pants round.

Golf has a way of making this happen to anyone.

Are we surprised? He blew it.

I wonder if there's a fine for that?

Big baby. Seriously needs to shup up and just get on with playing golf. Let his clubs do the talking.