The European Ryder Cup legend decided to take on this troll in an interesting way. 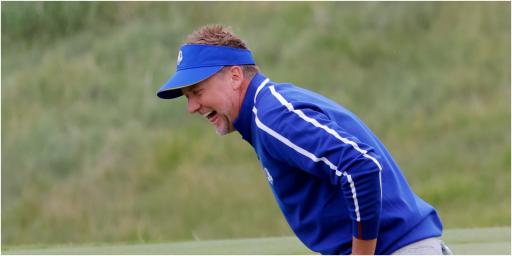 Ian Poulter is no stranger to social media and frequently updates his channels with content showcasing life in the golf world.

As you can imagine, there are a high number of trolls who decide to respond with nasty comments.

It's sadly the way of the world as the keyboard warriors decide to say something unpleasant instead of not saying anything at all.

Poulter, 45, updated his Instagram stories last night with an image of him on the range smashing some golf balls as he had jet lag.

One man decided to respond to Poulter by saying that he made a typo in his post.

And how he responded was interesting to say the least. Poulter fired back - obviously - but he also took the time to write a detailed response.

MORE: SCHEFFLER TURNS IT ON AGAIN

This is how Poults responded:

Certainly, it's a different approach to taking on the trolls.

The Ryder Cup legend reacted positively and encouraged the man who had told him that he sucks to not let his "beautiful family down".

Poulter's son recently hit the headlines after he signed for a storied college golf program.

He's signed on to be a Florida Gator and joins a group of other young men hoping to emulate their fathers' careers in professional golf.

Jon Daly's son LJ has recently started college. He can send it, and then some.

Poulter is currently in Dubai playing the DP World Tour Championship on the European Tour.

Next season it will be known as the DP World Tour.

Poulter is one of the ambassador's of the new venture.

PGA Tour
Ian Poulter practises by hitting MARSHMALLOWS into son's mouth
Golf news
Ian Poulter shares how he "gave up" with BBC SPOTY after latest Solheim Cup snub
The Masters
See who snuck inside the world's top 50 to earn their spots at the 2022 Masters
Golf news
Spiderman actor Tom Holland shares funny story about Ian Poulter at the Masters
Features
Thorbjørn Olesen: How did the jury clear the Danish golfer of multiple charges?