It appears the Northern Irishman was not happy with the way he finished the final event of the European Tour. 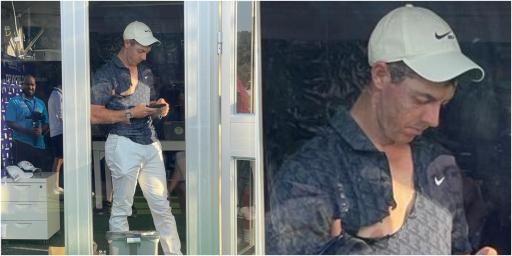 Rory McIlroy appeared to let the frustration get the better of him after throwing away the DP World Tour Championship.

The Northern Irishman, 32, was in fine form all week and at one point in his final round in Dubai was leading by two strokes.

England's Matt Fitzpatrick made a monumental run through the field and briefly threatened to spoil the party but he ran out of holes.

Collin Morikawa eventually emerged the winner of the tournament and he claimed the Race to Dubai in the process.

The brilliance of Morikawa, 24, cannot be understated. He remained patient, then birdied five of his last seven holes.

MORE: COLLIN MORIKAWA DOES THE DOUBLE IN THE DESERT

But in reality it probably should have been McIlroy's tournament for the taking.

Then disaster struck at 15.

He threw a dart with his wedge and it should have dropped stone dead for an easy birdie.

But sometimes you can be too accurate and the ball cannoned off the flag. A bogey followed.

Then McIlroy made a bogey at the next. Tournament over. 2021 over. Time to wind it down and focus on the majors next year.

Pictures emerged of McIlroy after the round with a tear through his shirt.

What has actually happened here is anyone's guess.

Before he reached the 15th at Jumeirah Golf Estates, McIlroy was 1-under for the day.

Some times you can be too accurate...

He finished his final four holes at 3-over par on his way to a final round 74. It put him at 2-over for the round.

Of those rounds he had only made four bogeys. He made four on his final round.

He did not look pleased.

MORE: BROOKS KOEPKA ON THE VERGE OF SRIXON SIGNING?

NEXT PAGE: RECORD PRIZE MONEY PLANNED FOR LPGA IN 2022