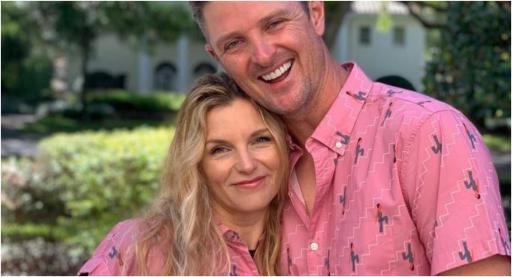 You might recall the footage of Justin Rose's wife celebrating wildly after Martin Kaymer's winning putt at Medinah in 2012.

But who is Kate Rose, the wife of former World No. 1 and major champion Justin Rose?

Justin reportedly met Kate when she was working as an assistant for the production company IMG in the year 2000.

At the time, Rose's career was flagging as he struggled to live up to his billing after his performance at The Open in 1998 when he was 18.

Born Kate Phillips, she graduated from the University of Sussex and was a keen gymnast - competing internationally.

She is said to have retired from gymnastics while she was working for IMG.

IMG represented Rose and she travelled with him on his international schedule.

After their wedding, Rose reportedly changed the numbers on his golf balls to 99 because 9 is her favourite number.

It was for double luck, he said.

For a decade, the pair lived in the Bahamas and most recently in America.

But Rose said before the BMW PGA Championship at Wentworth that he is in the process of moving back to the UK full time.

Other media have reported that Kate owns her own racehorse called Master Merion.

Kate is a driving force behind the Rose Ladies Series where the couple have donated funding to sponsor the events.

It was set up in 2020 in the wake of the pandemic as the ladies game struggled for funding.

Rose said he was "acutely aware" he was able to go back to work on the PGA Tour but it wasn't the same for the ladies' tours.

The 2021 schedule comprises of 12 events with the final taking place at Bearwood Lakes in Berkshire.

Kate is also known for her philanthropic work, and helped set up the Justin Rose Foundation in 2009.

The foundation aims to help fight childhood hunger in the Orlando area as well as provide education and experiences.