Amy Bockerstette became the first golfer with Down syndrome to compete in a US college championship in May. 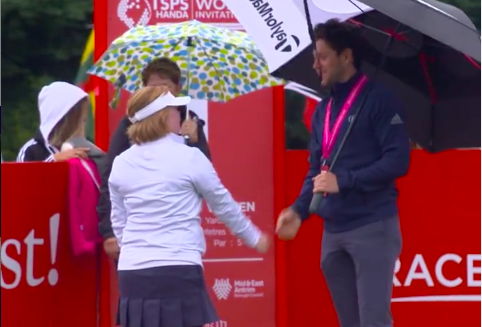 Amy Bockerstette has had a fun year in golf in 2021 and things got even more exciting for her when she met One Direction singer Niall Horan at the ISPS HANDA World Invitational.

On a rainy day where there were a number of celebrities present at Galgorm Castle and Massereene in Northern Ireland, Amy got to meet an international music star in Horan, who is also a keen golfer.

In front of an excited crowd, the 22-year-old hit a driver off the first tee for which she received many congratulations and a fist-bump from Horan himself.

Back in May, Amy made history by becoming the first golfer with Down syndrome to compete in a college championship. She represented Paradise Valley Community College at the NJCAA Women's Golf Championship.

2021 is Bockerstette's third year on the team at Paradise Valley Community College. Two years ago, she made even more history when she became the first person with Down syndrome to earn an athletic scholarship.

Not only has Amy been able to meet Horan in County Antrim this week, but she has before spent time with former US Open champion Gary Woodland.

In 2019, Bockerstette was invited to play the par-3 16th hole at TPC Scottsdale, which is famous for the stands that surround the green, with Woodland and his playing partner Matt Kuchar.

The young golfer hit her shot in the greenside bunker and walked alongside the two PGA Tour players down to the green, smiling and greeting the crowd who were cheering her on.

It is so heartwarming to see stars such as Horan, Woodland and Kuchar spending time with Amy. She has created so many great memories for her and her family in the last couple of years.

NEXT PAGE: RORY MCILROY: "I NEVER DREAMED OF AN OLYMPIC GOLD MEDAL"