Brooks Koepka looks to be back to his best ahead of the big tournaments on the PGA Tour. 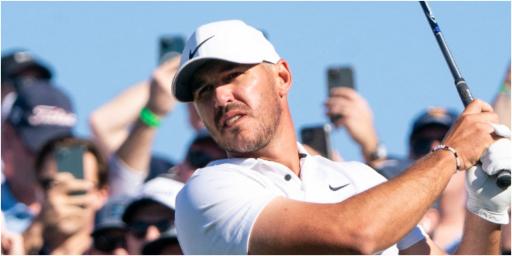 Brooks Koepka appears to have rediscovered his form at exactly the right time.

We are only two months away from The Masters and Koepka has the eye of the tiger again. His comments suggest as much.

Although prickly when asked about jibes towards "greedy" professionals, he appears to be back in his element at the WM Phoenix Open.

Koepka admitted he was embarrassed by his current ranking in the world. It's 20, just ahead of England's Tyrrell Hatton.

Although, that is a far cry from the top, Koepka, a four time major winner, previously spent 47 weeks at the top of the mountain.

Koepka doesn't strike me as the type of player who has battles with his mind. Over the last few months, it's been with the body.

MORE: Brooks Koepka announced on the tee as "Bruce Koepka"

Even Koepka thinks so. "A lot of it has to do with injury, man" he reflected in Phoenix before going 66-66 at TPC Scottsdale.

"I've been hurt, on the sidelines, not playing, playing through injury, you can't compete with guys out here," he added.

During his first round he found 83 per cent of greens in regulation. In his second round, he increased that to 94 per cent.

His driving, too, was a marked improvement. Koepka previously raised eyebrows when he claimed he only really practised for the majors.

Then at the back end of last year, after the Ryder Cup, he described himself a "range rat". Flood-lit range sessions followed.

Of course, with Koepka, we cannot get ahead of ourselves. Form is temporary. But his clear-mindedness is striking.

Back in business? Definitely getting there, at least in this humble golf writer's opinion.

Does Koepka? "No, I think it's just been getting more comfortable," he told reporters after his first round in Phoenix.

"I feel like my iron play has been right there. I haven't driven the ball very well, but I got that sorted. That was easy.

"Just a few things. It's tough to play from the rough, playing Torrey, just wasn't doing some things. Got that figured out."

Figuring out his golf swing is something Koepka has found fairly simply in the past, providing his body cooperates.

Now it looks like things are slowly kicking back into gear for the 31-year-old.

One a year, over 14 seasons, he told us confidently. While those eyebrows may be firmly still raised at this prospect, he's one to fear again.

"I feel very confident, like where I'm ahead of probably where I have been every year previous, where I feel like my game is at," he said.

NEXT PAGE: Brooks Koepka & Justin Thomas unhappy with their OWGR