"Embarrassing" - Why Brooks Koepka & JT are unhappy with their OWGR

Brooks Koepka admitted he is embarrassed by his current world ranking, while Justin Thomas is "p***** off" and tries not to pay attention. 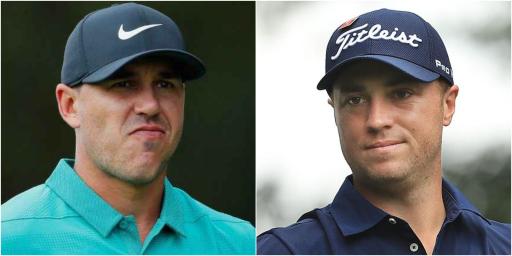 Brooks Koepka had a confession after his first round of the WM Phoenix Open: he's a bit embarrased by his world ranking.

Koepka was the early leader after 18 holes and as the defending champion has made a strong start in an attempt to win his ninth PGA Tour title.

The 31-year-old had his driver dialled. The putting game was strong, too. He admitted he's been working hard on both areas of his game.

Blonde Koepka was dressed in typical Tiger Woods attire of red and black in round one at TPC Scottsdale. He made six birdies and dropped only one shot.

At his press conference afterwards, Koepka was asked if he happens to know where he is currently ranked in the world.

He was told it was 20. Though injuries have definitely played a part in restricting Koepka over these last few months in being his overpowering best.

Koepka added: "I mean, that's embarrassing to be 20th, I feel like. A lot of it has to do with injury, man. I've been hurt, on the sidelines, not playing, playing through injury, you can't compete with guys out here. It's nice to be somewhat healthy and get out here and I mean I'm not too worried about it, it will bounce back up."

Justin Thomas was asked the same question a short time later. "Something top-10, probably," he replied after he fired a first round 4-under 67.

He said: "I mean, I knew -- I know, like for where I'm at -- I tried to stop looking because, yeah, it pisses me off too, I'm not happy at all that I'm seventh. I feel like I'm way better than that and I've been working harder to try to do that.

"But at the same time that two, three, through eight feels like me, D.J. and Rosie a couple years ago with No. 1. It was like literally every week could change and fluctuate quite a bit.

"So I'm trying to not worry about it, I know that if I go out and play good golf and at least play to the caliber that I know that I can, then I'll be back where I feel like I know I should be."