Brooks Koepka wouldn't elaborate when he was asked about his social media response to Phil Mickelson's comments. 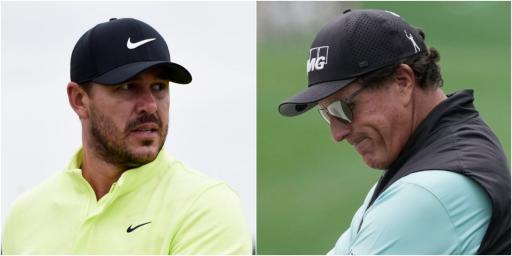 Brooks Koepka wouldn't elaborate on his dig at Phil Mickelson when questioned ahead of the WM Phoenix Open.

The defending champion last week commented on an Instagram post about Mickelson's apparent anger at the PGA Tour and their "obnoxious greed".

RELATED: WHO KNEW PHIL MICKELSON MARKED HIS CALLAWAY GOLF BALL LIKE THIS?!

"Don't know if I'd be using the word greedy if I'm Phil," wrote the 31-year-old four time major champion.

Koepka potentially teed up another fierce rivalry. But when he was asked about this at his press conference, he shut the questions down.

"I said what I said. I don't need to say anything more. You take it how you want. I know what I meant by it, but it's up to you," Koepka said.

Do you agree with him on the media rights question, he was asked.

"Look, man, I said what I said. So you can take it from there," came the reply from Koepka, who has still got his blonde haircut.

Koepka said of his haircut: "I just felt like doing it. I talked to my boy Philly, who is my barber, and he wanted to do it for like a year. I just decided. We're like, All right. We got bored, so might as well do it."

How long will he keep it?

"Yeah, it is permanent, so, I mean, I can't really just wash it out," he said. "It will be here for a little bit until the rest of it grows in. I'm lucky enough I have enough hair it will grow back."

Of course, Koepka wasn't allowed to leave his press conference without being asked the S word. That being, the Saudis, and the talk of rival leagues.

It was what ruffled Mickelson's feathers to begin with and he has promised he will outline further his stance in the future, though he admits it won't make him very popular.

Koepka said: "It's been pretty clear for a long time now that I'm with the PGA Tour, it's where I'm staying. I'm very happy. I think they do things the right way. People I want to do business with. I'm happy to be here.

"And I don't really talk about it with many other players. They have asked a couple of questions, but I trust them."