Brooks Koepka turned heads when he showed up with blonde hair on the PGA Tour this week. Now he also has a new name. 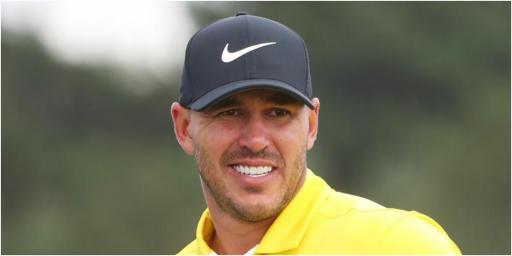 Brooks Koepka raised eyebrows when he turned up at Torrey Pines this week with bleach blonde hair on the PGA Tour.

Apparently, 31-year-old Koepka has been wanting to do this for a while and we're not sure how long he will be keeping this new look.

But while Koepka has been taking the comments about his hairstyle in his stride he was also involved in another humorous moment.

Koepka was stood on the tee ahead of playing his second round at the Farmers Insurance Open when he was introduced as: Bruce Koepka.

"Next on the tee please welcome Bruce Koepka," the starter says, much to the confusion of everyone else. A few chuckles can be heard.

"Let's go Brucey," one person yelled. Another spectator offered support for "Brooksy" but we don't think he heard it.

Koepka heard it, too, and could only smile as he sent his tee shot down the fairway.

Unfortunately, neither Bruce Koepka nor Brooks Koepka made the 3-under cut line in San Diego.

Well, as one person pointed out - that's what you get for stealing Tiger's clothes.

Danielle Kang has to correct a starter on LPGA Tour

The first tee announcer must have missed last week...

Danielle Kang is on something of a role on the LPGA Tour at the moment and picked up her sixth career win last week.

She became the champion of champions in Florida with a sublime performance.

Kang had to correct the announcer before starting her third round at Gainbridge LPGA at Boca Rio.

She also came close to dunking one on a par-3, too:

Related: How much are Brooks Koepka & Jena Sims worth?