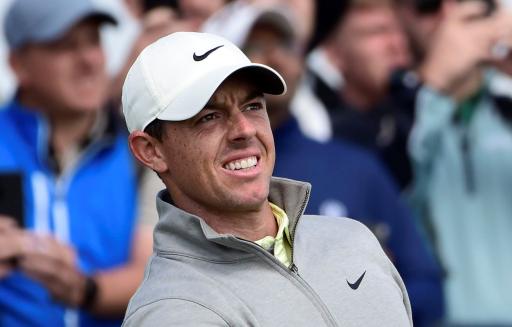 Rory McIlroy might not be that enthused about travelling to Tokyo to tee up in the Men's Olympic Golf Tournament next week, but he believes it is "the right thing to do" for the sport.

McIlroy was speaking to the media after finishing a disappointing tie for 46th on level-par at The Open Championship on Sunday.

"I am not a very patriotic guy," said McIlroy when quizzed about his thoughts on the upcoming Olympics where he will be representing Ireland alongside Shane Lowry.

"I am doing it because I think it is the right thing to do. I missed it last time and for golf to be an Olympic sport you need your best players there, and I feel like I want to represent the game of golf more than anything else.

"I don't know if there is much to look forward to, it is obviously going to be a very different environment.

"I am looking forward to getting another week's golf in and trying to get my game in shape. There is not much else to do there so 12 hours a day on the golf course, hopefully I get my game in a bit better shape."

McIlroy will be making his first-ever start at the Olympics having bypassed the tournament in Brazil five years ago due to concerns about the Zika virus.

Fast forward to 2021, and the world is now facing an entirely new scenario in the form of the Covid-19 pandemic, but this time around, McIlroy is content on teeing it up having been vaccinated.

"I've travelled all over the world since this thing [the Covid-19 pandemic] started and I don't know how I haven't got it due to where I've been and the environments I find myself in," said McIlroy.

"I've done everything that I can to not get it. I'm vaccinated, when I travel, I travel on my own as I have the luxury of doing that.

"I hopefully shouldn't pick it up on the way then when I get to Tokyo it is just a case of abiding by the rules and protocols, and trying to not get it so that your stay there is only seven days."

The Men's Olympic Golf Tournament tees off next Wednesday and is a four-day strokeplay tournament.

Previous
Golf Ireland gives GREEN LIGHT for British visitors
Next
Editor's Column: "Believe the hype, Morikawa is a man for the majors"