Brooks Koepka is using AIMPOINT on the greens but admits he is WINGING IT!

Brooks Koepka started using the popular AimPoint putting technique to read putts at the Ryder Cup, and he is keeping it going on the PGA Tour. 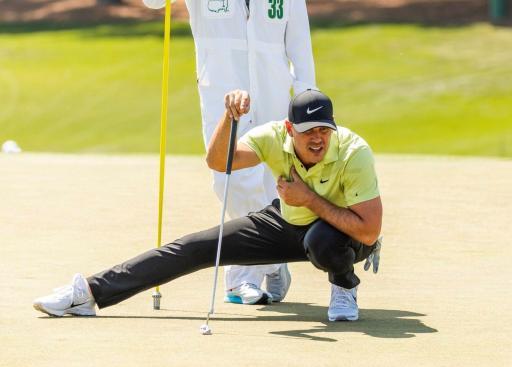 Brooks Koepka admits he started using AimPoint on the greens at the Ryder Cup two weeks ago but that he probably isn't using it the way it was intended by putting experts.

For those unaware of the seemingly new popular putting pre-putt routine, AimPoint allows a golfer to read greens using their feet to determine the slope percentage of a given putt.

Here's a quick and easy explanation of AimPoint from PGA coach Erika Larkin:

Despite going 2-2 and helping USA win the Ryder Cup at Whistling Straits, Koepka admits he is winging the whole AimPoint experience that is also favoured by the likes of Dustin Johnson and Adam Scott on the PGA Tour.

"So I've kind of gone to my putting coach, Jeff Pierce, we worked a little bit on AimPoint. I started to use that, Ryder Cup was the first time I used it, and I thought that was a big thing," Koepka said at this week's Shriners Children's Open.

"It's just using it kind of more as a... not the answer, more of the double check or having an idea where... this putt should be breaking.

"Then get behind it, bend down, look at it, do my normal thing, OK, they both work... just a double check system. Plus it takes a little bit off of having to bend down all the time on the knees so it's a double added bonus.

Koepka opened with a round of 3-under 68 at the Shriners Children's Open using AimPoint once again on Thursday.

His putting could certainly do with some work though as he ranked 124th in strokes-gained putting (-1.900).

NEXT PAGE: WHO IS BROOKS KOEPKA'S FIANCEE JENA SIMS?