Tiger Woods & Sergio Garcia: A history of their poisonous feud

Tiger Woods and Sergio Garcia do not like each other. The history of their feud dates back to 1999. This is what has happened since. 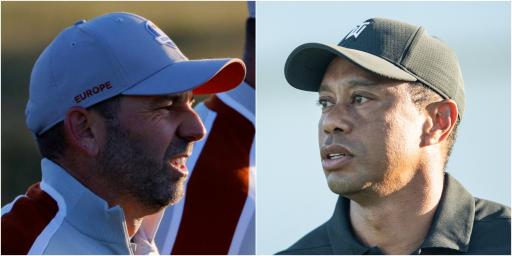 Tiger Woods and Sergio Garcia perhaps have one of the most poisonous relationships in golf, if reports are to be believed.

It is no surprise given they have mixed in the same circles for a very long time. Both were prodigious talents.

The history of their feud has involved accusations of cheating, gamesmanship and even racism. The spat reportedly began in the year 1999.

At that time, Garcia was 19 years old. He was snapped giving Woods, 24, daggers when the cat claimed his second major.

Woods' margin of victory at the PGA Championship at Medinah was by one stroke. Garcia congratulated his rival with a hug.

But it appears they were just playing along for the cameras. In one moment, Woods jokingly signed a hat for Garcia.

It appeared that what began as a playful competition had soured. The two later played in a made for TV match in 2000. It was dubbed the Battle at Bighorn.

Garcia won the match and appeared to celebrate as if he had won a major. Perhaps that rubbed Woods the wrong way. Never play with fire, Sergio.

In 2002, at Bethpage Black, the two squared up again at the U.S. Open. Play was suspended due to rain. Sergio complained tournament officials were biased.

He claimed that if Woods was on the course while the heavens had opened then the tournament organisers would have suspended play.

Perhaps that irked Woods? Was it true? I mean, Woods was the poster boy of golf at the time - but it's still a pretty remarkable thing to say.

A few years later, in 2006, Woods won The Open two months after his father had died.

Garcia's final round didn't go to plan and Woods - in the end - won emphatically by six strokes to win his 11th major.

Woods later apparently texted a friend saying how he "bludgeoned Tweety Bird". It was a reference to Garcia's flashy, yellow outfit.

It certainly does sound like something Woods could have said.

Afterall, from his couch, he reportedly sent a message to the United States camp at Whistling Straits on the eve of their Ryder Cup victory last year which read: "Step on their necks".

At the 2006 Ryder Cup, Garcia taunted Woods - telling the media he would live to play the cat repeatedly due to his poor record in the competition.

That probably didn't sit well with Woods. But Woods is the type of player who just lets his records speak for themselves.

In 2013, their feud took on a dark turn. It was an extraordinary moment. Garcia said he would invite Woods over for some "fried chicken" after the Players.

Garcia later apologised for his remark made at the European Tour Players' Awards dinner.

"I answered a question that was clearly made towards me as a joke with a silly remark, but in no way was the comment meant in a racist manner," he said.

But that was not the end of the matter. The back-and-forth continued. Can you guess who won the Players? Yep, it was Woods.

It was in that tournament that Garcia complained about being distracted by Woods on the second hole. That account was disputed. Both players refused to back down.

When Woods was asked if he would clear the air with Garcia, he took a deep breath, paused, then said simply: "No".

It drew fits of laughter. Garcia, when asked about that at the 2013 BMW PGA Championship at Wentworth, said: "He doesn't need me in his life, I do not need him in mine."

Garcia and Woods, when we first watched them play professionally, seemed destined to have brilliant, competitive rivalry.

But what happened was a war of words.