At the 2015 Wyndham Championship, Tiger Woods was tied for the lead with Tom Hoge but he had never heard of the PGA Tour rookie. 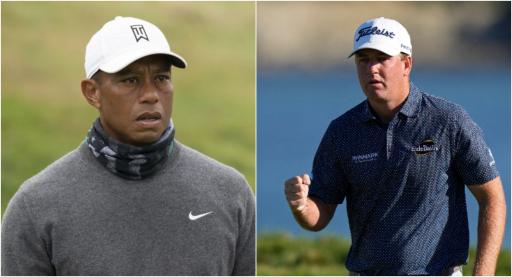 Tiger Woods was asked a very awkward question by a reporter at the 2015 Wyndham Championship and he was made to look silly.

After the second round of the event at Sedgefield Country Club, Woods shared the lead with a PGA Tour rookie named Tom Hoge.

Obviously, we all know who Hoge is now. He is a winner on the PGA Tour and he has broken into the top 40 players in the world, but seven years ago, he wasn't as well known.

After finishing his second round of the event, Woods spoke to the media and he was asked if he had heard of Tom Hoge. His answer was priceless.

"No, I wouldn't. What is it? Or him? Or what? I don't know," said Woods who was clearly confused.

"No, I don't know. Never met him, never seen him. Don't know anything about him."

Woods and Hoge were tied for the lead when the question was asked. Perhaps when PGA Tour players say they don't look at leaderboards, they really mean it?

In the defence of the 15-time major champion, there wouldn't have been many players, golf fans or members of the media who would've heard of Hoge at the time.

Neither golfer went on to win the event. Woods finished in a tie for 10th and Hoge was placed in tied 38th. Davis Love III won the event which was the last of his 21 PGA Tour wins.

It is safe to say that we all know who Hoge is now. The 32-year-old has not only won this season but he has also made three top-10's and already earned over $3 million.

If Tiger was watching the action at Pebble Beach over the weekend, I'm sure he'd have enjoyed watching his former playing partner winning his first title.