Was Shane Lowry OUT OF ORDER for his Ryder Cup comments on drunk US fans?

"Patrick Cantlay riling up the crowd on the 8th hole whilst I was lining up my putt annoyed me quite a lot." 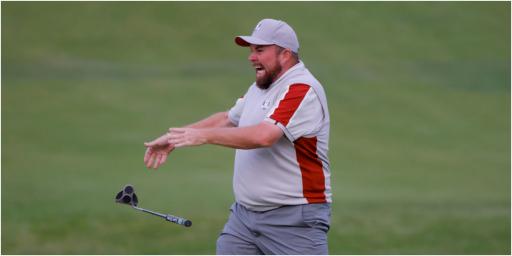 When Shane Lowry sank a putt on the 18th green to take a point off the United States at Whistling Straits he did something he promised himself he wouldn't do.

He let out an emotional outburst on par with some of the stellar European company who have celebrated just like that before him.

He vowed to himself he wouldn't get caught up in the goading from the American fans and try and try and keep calm in the eye of the storm.

"At the start of the week, I promised myself that I wasn’t going to get caught up in the fist pumping or celebrating from the Americans, if I do something good, I'm just going to tip my hat. The crowd weren’t going to cheer for me," Lowry told PaddyPower.

But the Ryder Cup is a strange place and it does things to people. Lowry was probably more fired up than anyone and deserved to be played more.

So perhaps we could give Lowry the benefit of the doubt over his comments in the wake of their humbling defeat.

It's clear Lowry is annoyed, or was annoyed with some of the United States fans' behaviour on the fairways lining Lake Michigan.

Abusive comments have no place in society.

But during a Ryder Cup expect to be booed and jeered. Suck it up, Shane - we're just as bad.

Surely the Americans just gave as good as they got?

An incredible performance from Shane Lowry capped off in the perfect fashion with a clutch putt on the 18th #RyderCup pic.twitter.com/m4WlXXSwRP

Lowry's debut was a baptism of fire. His comments - at least in my mind - suggest an inkling of sour grapes. But what does stand out is his passion. He's hooked on the Ryder Cup drug forever now. Just look at that putt he holed on the final green. He cares a lot.

Everyone loves seeing that passion, no matter if you support America or the European side. It's that type of passion that lead to Rory McIlroy breaking down in front of us on the 16th green as Europe's fate was signed, sealed and delivered.

There was gamesmanship. Boy was there gamesmanship. Have we ever seen such a pathetic display from Bryson DeChambeau putting his elongated putter next to the hole to suggest he should have had his putt conceded? Come on, Bryson.

RELATED: SERGIO GARCIA DID NOT SLEEP AFTER RYDER CUP DEFEAT

This is what it means to me. Big day tomorrow @RyderCupEurope pic.twitter.com/KhF05YnPUL

"At the start of the week, I was thinking, 'this is a bit mad, it's pretty cool' as you're being booed all over the shop, but as the week goes on, it does get pretty annoying especially when you're getting beat. It's quite a frustrating situation to be in, but I loved every minute of it," Lowry added.

Lowry also had some interesting comments to make about short putts not being conceded.

"The problem was, every time an American putted inside six feet, I was getting booed if I didn't give it to them. They obviously played up to the crowd.

"I wasn't giving them anything last week because I was getting booed. I was playing with Tyrrell Hatton on Saturday afternoon and he wanted to give them a couple of balls and I said, 'no, let's just let them see the ball in'. It was a bit of gamesmanship from me as well."

Lowry is a major champion and his abilities will surely see him on many more European sides. But if you're upset about getting booed, it's probably best you don't turn up to Bethpage Black in four years' time.