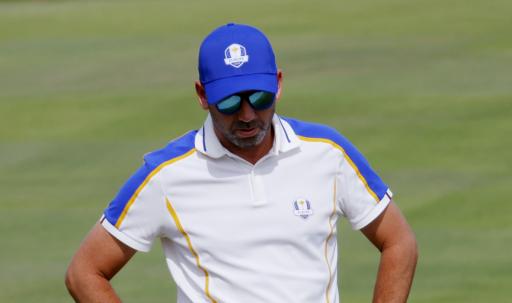 Sergio Garcia admitted that he "didn't get much sleep" after Team Europe were well and truly beaten by America at the 2021 Ryder Cup.

Although Garcia delivered three points alongside his Spanish teammate and World No. 1 Jon Rahm, Team Europe were swept away by Steve Stricker's side, losing 19-9.

It was the 2017 Masters champion's 10th appearance at the Ryder Cup, so he has experienced all of the ups and downs that come with the tournament. The defeat moved some of Europe's players to tears and this was a loss that not even Garcia could've foreseen.

He must now try to turn his attention to the Sanderson Farms Championship this week, the event which he won on the PGA Tour last season.

"I mean I feel good. I’m not going to lie, obviously didn’t get much sleep on Sunday night," said Garcia after a practice round in Jackson on Wednesday.

"But Monday and Tuesday it’s been good, I was able to rest a little bit in Austin with the family, got here last night and I feel pretty good at the moment.

"I mean you obviously think about it a little bit, it’s very fresh, but at the same time I’m obviously 41 now and I played, I’ve been fortunate to play many Ryder Cups and win many and also lose some so, we just got outplayed, it’s as simple as that."

He was the Ryder Cup's record points scorer entering the event and he has now earned 28.5 points in his career for Team Europe. He has been an incredible servant to the side and he found yet another inspired pairing with Rahm at Whistling Straits.

The major-winning pair provided European fans with a glimpse into the past when Seve Ballesteros and Jose Maria Olazabal used to play together at the Ryder Cup.

"You don’t get to World No. 1 and do all the things he’s done just by luck or by chance. So it was nice to be a part of it, it was nice to be his partner and kind of combine nicely between the two of us," added Garcia.

NEXT PAGE: RYDER CUP: WOULD TEAM EUROPE BE BETTER OFF WITH 12 CAPTAIN'S PICKS IN ROME?!