The American pairing let themselves down with their display on the 15th hole at Whistling Straits. 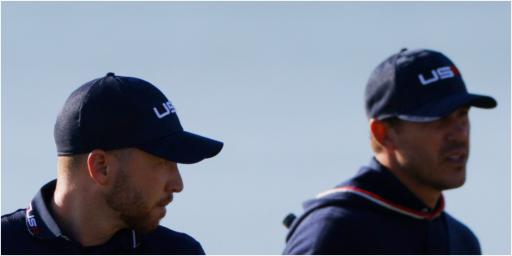 Just as it looked like we were heading for a weekend without controversy at the Ryder Cup up stepped two unlikely men.

And it was surprising to say the least considering our assembling cast were none other than Brooks Koepka and Daniel Berger.

We'll set this out plain and clear: the pair of Americans were a disgrace to the game and the spirit it should be played in.

Whilst we're not clear of every minute detail of the rules of golf, we're sure they don't cater for: Koepka is scared of getting injured.

If you haven't seen the clips, you can watch the heated exchange below which also included a cameo from Europe's Sergio Garcia.

The controversy unravelled on the 15th hole and Koepka's behaviour can only be described as egregious at best and petulant at worst.

In a nervy match during the Saturday morning foursomes, Berger's drive ended up in an area of wasteland near a fairway bunker.

Engulfed in the tall grass, the cameras couldn't even pick up the ball.

While his well-being concerns are understandable this is not a great look for @BKoepka pic.twitter.com/CW5JROBWRy

With the Europeans at that stage leading by one, Koepka gingerly assessed his lie and the situation before asking and being denied relief.

You see, there was also a drainage channel leading out of the bunker and his ball was on a downslope.

To us amateur hacks this looked like an impossible shot to get it out let alone on the green, and Koepka didn't fancy it at all.

Perhaps with his most recent wrist injury in mind that almost kept him out of the Ryder Cup he demanded a second opinion.

Nothing was going to get in the way, both rules officials stated before Koepka complained: "You realise it's on a downslope, right?"

Have you ever seen me hit a ball, Koepka asked, which made Garcia chuckle and spit up the water he was drinking.

Berger also chimed in with how can you not say that's man-made?"

The rookie also asked how can you think he won't hit that?

Up stepped Sergio and he took an address position to see the issue.

This wasn't on, Sergio.

RELATED: BRYSON IN GIMME PUTT CONTROVERSY AT THE RYDER CUP

Then Koepka took out his frustrations after about 10 minutes or so of back-and-forth against the referees who refused to budge.

He didn't break anything and greened it from 190 yards when he couldn't even see the ball.

Koepka refused to entertain the media with a detailed explanation, simply insisting of the ruling: "Yeah, we didn't get it."

Brooks - just because you've had a recent wrist injury doesn't support your case or let you circumvent the rules.

And to Berger: if you don't like a ruling you can plead your case and move on.

By describing it as "bulls***" is not what golf or the Ryder Cup is about.

Outrageously, the referees did not punish this duo with an immediate loss of a hole.

Spectators were forewarned any abusive behaviour towards players would be punished so why isn't this applicable to the players?

This was poor from Berger and Koepka.

If Koepka had a genuine concern about being injured he should've spoken to his team mate before taking a drop.

It's your career, after all.

They were hardly in a desperate situation.