Junior golfer Dylan Hartwell fired an unbelievable score of 14-under-par in a tournament sanctioned by the Oregon Golf Association. 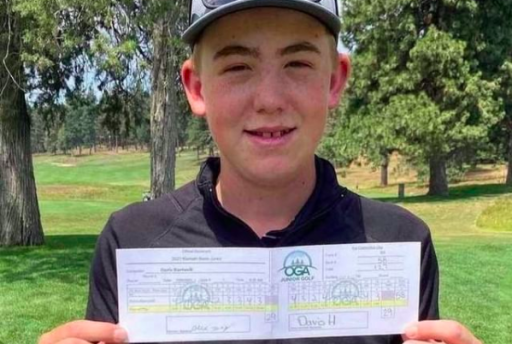 The 13-year-old has a big future in golf ahead of him and he will never have a better round than his one at Running Y Ranch Resort in Klamath Falls.

Hartwell shot a stunning score of 58 in a golf tournament sanctioned by the Oregon Golf Association. He made 14 birdies and no bogeys on his way to a round of 14-under-par which is not going to be bettered for a long, long time at the club.

"I was shaking and in shock, I still am," Harwell told the Medford Mail Tribune.

"I was just kind of focused on the next hole, the next drive. I was working on my driver all day because it's a little inaccurate right now. I was feeling confident with the putter, and I just kept making birdies."

Hartwell lives in Klamath Falls and Running Y Ranch Resort is his home course, so he was very pleased to blow his previous best of 64 out of the water in this tournament, which he won by a staggering 16 strokes over 36 holes.

The young golfer made seven birdies on each nine on his way to an unbelievable score. It is not often that we get to discover a scorecard like Hartwell's, let alone in the same week as Jhared Hack produced an incredible score of his own in Las Vegas.

NEXT PAGE: "IT WAS LOUDER THAN A FOOTBALL MATCH!": JON THOMSON SPEAKS ABOUT OPEN EXPERIENCE