It is safe to say that Web.com Tour player Jhared Hack will never have a better round of golf than this... 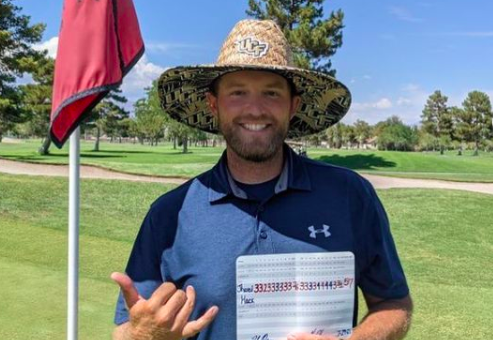 In recent years, we have seen PGA Tour golfers shoot superb scores of 59 which come once in a blue moon, but professional golfer Jhared Hack has blown these achievements out of the water with an amazing round at Las Vegas Golf Club.

On a day that Hack is not likely to forget for a while, he carded a staggering score of 57 which was 15-under-par at the Nevada golf course.

"Well that was fun! Career low -15 with a bogey! Been working hard on the mental side, those last few holes today got the juices flowing…" Hack wrote on his Instagram page.

It certainly must have been fun, especially with the way the American Mini-Tour player began his round, making six birdies and two eagles in his first nine holes.

Hack played the first half of his round in 26 shots, which is quite frankly unheard of and his form did not relent for the second nine holes of his round.

He added four more birdies on the back nine, which were accompanied by pars on the 12th, 14th and 16th holes. Quite remarkably, Hack did make a bogey on the par-3 17th hole which means he could have scored a 56 or maybe even a 55 if it was a birdie instead.

Hack played the back nine in 31 shots to complete his score of 57. This round will no doubt be remembered by members and employees at Las Vegas Golf Club for years to come.

The vast majority of golfers around the world can only dream of getting close to playing under par, let alone shooting 15-under-par, so it is always exciting to see these types of stories.