Boris Johnson's former press secretary Robert Oxley - who was involved in this hilarious moment - has secured a top job at The R&A. 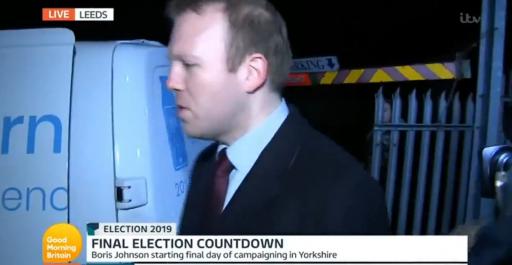 Boris Johnson's former press secretary is taking up a position at the R&A.

According to a report by The Scotsman's Martin Dempster, Robert Oxley will be assuming the role of director of public affairs.

If the face looks familiar it's because Oxley famously ushered a reporter away from Johnson in December 2019 before he famously hid in a fridge.

He was accused of dropping an F-bomb live on Good Morning Britain that led to a shocked reaction from anchors Piers Morgan and Susanna Reid.

Martin Slumbers, the chief executive of the R&A, said in a statement:

"We are delighted to welcome Robert to the organisation in a new public affairs role as we aim to engage more deeply with policy makers to increase our global impact, influence and reputation.
"As an experienced communications professional, having previously worked in various government positions, Robert can support our wider priorities for golf to be recognised and operate smoothly within policy and legislative frameworks."

Remind yourself of this memorable Boris Johnson moment...

Here is Boris Johnson's spokesman telling a journalist to fuck off, and then the Prime Minister hides in a fridge to avoid answering questions.

Oxley is reportedly a keen golfer and grew up opposite Woodhall Spa Golf Club in Lincolnshire. He now lives in Surrey.

His new role will see him focusing on the R&A's relationship with government departments and improving the perception of the R&A.

It has been an extremely interesting year for the governing body that oversees golf's oldest major after the emergence of the breakaway LIV Golf League.

Slumbers, in particular, has had to answer questions about whether or not players who have joined LIV will be banned from future Opens.

Despite condemning the LIV players at the 150th Open Championship at St. Andrews in July, he handed the likes of Cameron Smith a lifeline in October.

Slumbers said in October the R&A will announce their decision in early 2023, adding:

"We're not banning anyone. We are not going to betray 150 years of history and have the Open not be open. The name says it all. And that's important. What we will do is ensure that there are appropriate pathways and ways to qualify. I'm looking forward to seeing Cam Smith tee-up around 9:40 a.m. on the first day of the Open next year. The Open needs to set itself aside from what's going in terms of disagreements and make sure we stay true to our principle, which is to have the best players in the world competing."

As for Oxley, he previously was a special advisor at multiple UK Government departments, most recently at the DCMS.

Before that he worked for Johnson.

"I'm delighted to have joined the fantastic team at the R&A which plays a unique and vital global role in championing and developing the game.
"Since day one of talking to the R&A, it has been clear they have a clear vision for the sport and I'm really excited to join an organisation driven by the values of integrity and inclusivity.
"We have an amazing opportunity to develop and sustain golf on a global scale for both current and future generations. I'm hugely excited to be part of that."