R&A chief Martin Slumbers has revealed the date they will confirm their approach to the LIV Golf series as he opened up on Greg Norman's St. Andrews snub. 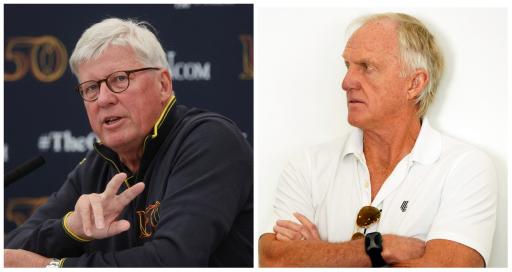 Martin Slumbers, the chief executive of the R&A, says there will be a decision over how the major plans to proceed with LIV Golf in early 2023.

In a wide-ranging interview with John Huggan of GolfDigest, Slumbers has opened up on a number of topics.

Chief of which is how the major plans to deal with participants in The Open Championship who play in LIV Golf Tour events and the qualifying process.

Slumbers said he looks forward to seeing Cameron Smith - who moaned about Phil Mickelson's slow play in Miami - return to defend his title.

As for how the governing body will proceed, Slumbers said you only have to go back to what he said in July.

Back then, Slumbers backed up Tiger Woods' claims about LIV, saying that he did not believe the breakaway tour was credible.

This was after the news broke that LIV chief Greg Norman wasn't invited to the past champions' dinner.

It was a decision that clearly didn't sit well with Norman, who also wanted to participate in the landmark major even at the age of 67.

The R&A said no. And Slumbers claimed to Huggan that he believed the only reason Norman wanted to be there was to create noise.

In Slumbers' opinion, he believes The Open needs to be "distinct from that". "From my perspective, I had a deep responsibility to our sport," he said.

Of the LIV Golf decision, Slumbers told the publication:

"We'll go public in January/February with what we are going to do with regard to LIV golfers. But if you want a guide, go back to what I said in July. We're not banning anyone.
"We are not going to betray 150 years of history and have the Open not be open. The name says it all. And that's important. What we will do is ensure that there are appropriate pathways and ways to qualify.
"I'm looking forward to seeing Cam Smith tee-up around 9:40 a.m. on the first day of the Open next year. The Open needs to set itself aside from what's going in terms of disagreements and make sure we stay true to our principle, which is to have the best players in the world competing."

Of the decision not to allow Norman to break bread with his fellow past champions, he said:

"Greg has made comments about our decisions, which I've ignored. It was clear to me that Greg had not been to a champion's dinner in quite some time.
"He wasn't there in 2000, 2005, 2010 or 2015. With everything that was going on, it was clear to me that there was a reason why he wanted to be there this year.
"If he had been there, it would have been about noise. The Open has to be distinct from all that. I didn't want to have noise between two rival tours and two big personalities. It would have overshadowed what was happening that week."

"I was very polite and very deferential to Greg. I asked him to understand my perspective. And I did so privately. I did not make it public. I never said anything and never commented on it.
"That week was supposed to be about the first event in our game's history reaching its 150th playing. On arguably the greatest course in the world. I was never going to lose focus on that."