The American dancer, actress, singer and songwriter Julianne Hough was playing golf in some questionable attire. 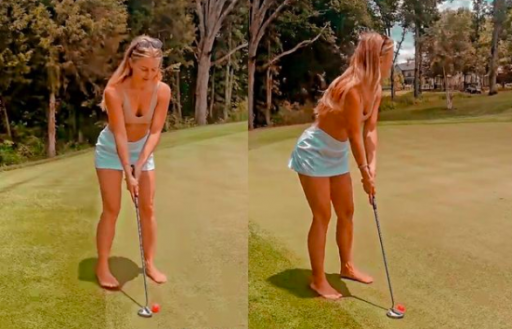 Looking back at her career, Julianne Hough is a woman of many talents and now it has emerged that golf could be on the long list of talents that she possesses.

Hough is a successful actor having appeared in films such as Rock of Ages, Safe Haven, Footloose and Dirty Grandpa and in 2015, she won a Primetime Emmy for Outstanding Choreography in Dancing with the Stars.

The 32-year-old has also been a country singer. Her first country-music single, "Will You Dance With Me", was released in 2007 and her first album also came out in 2008.

This is a testament to her glittering career in television too, but it would appear that in her downtime away from the screen, she enjoys a spot of golf.

Many fans were surprised to see Hough take to the golf course and show her skills, but you never know, we may see more of this as the weeks and months go on.

However, if the popular actress, singer and dancer was to take up golf on a regular basis, she may want to have a think about wearing some golf clothes as traditionalist golfers may have something to say about that.

Hough was wearing a crop-top and a skirt in the footage of her playing golf, so it is fair to say that she would need to dress a bit more formally if she was to take on an 18-hole course one day.