Awful vandalism at Florida golf club could cost up to $25,000

Straight after raising money for the Children's Miracle Network, the members of The Golf Club of Summerbrook suffered horrible vandalism to their course. 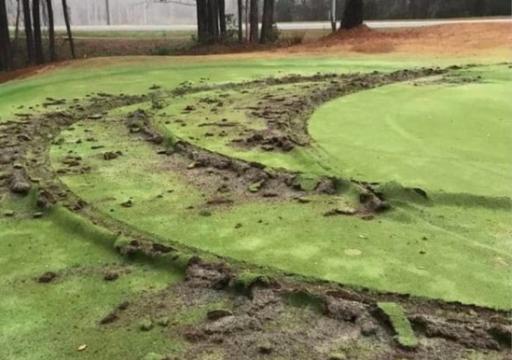 The Golf Club of Summerbrooke in Florida was on the end of some shocking vandalism last weekend which saw part of the course chewed up and destroyed.

Club owner Reagan Hobbs was told that the green on hole 11 had been damaged by deep tyre tracks which looked to have come from a truck.

The truck had driven on the hole overnight on Friday and Hobbs couldn't hide his frustration despite the club being protected from property damage by their insurance.

"Our membership is always so generous. And then to have this happen, it felt like a punch in the gut to everyone," said Hobbs.

"It stinks and it's so frustrating."

Related: Paige Spiranac ranks in the top 10 for MOST TROLLED female athletes

That night before the damage was caused, the members of The Golf Club of Summerbrooke helped to raise more than $1,000 for the Children's Miracle Network.

Hobbs is not sure how much the damages will cost, but rebuilding the green on the 11th hole could cost up to $25,000. This is the first incident of vandalism the club has seen for some time.

"We’ve gone three years without a major incident of vandalism. We’ve had some minor issues... but someone gets stupid and does this, and it really hurts," Hobbs added.

The club posted two pictures of the tyre track damage on social media. The club is planning to use camera footage and to ask neighbourhood residents for help in finding the culprits.

Hobbs has owned the course for 18 years and the saving grace is the positive reaction and support he has received off the back of the incident.