Brooklyn Beckham has posted a video of his golf swing as he gets settled into married life with Nicola Peltz. 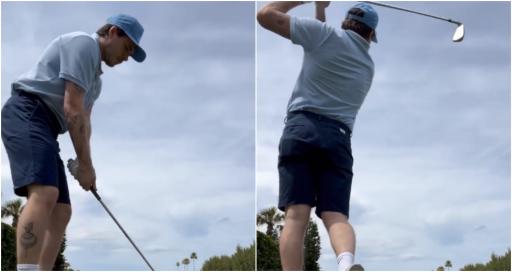 Brooklyn Beckham has only been married for two weeks but it appears he has already immersed himself into husband life... by playing golf.

The eldest son of the football icon, 23, tied the knot with model and actress Nicola Peltz in lavish ceremony that reportedly cost $3million.

They exchanged vows near Nicola's parents' home in Palm Springs, Florida. The pair have been keeping a low profile after getting stuck into married life.

Their wedding boasted a stream of A-list guests with stars such as Eva Longoria, the Williams sisters, Gordon Ramsay and Mel C in attendance.

Former footballer David, 46, who captained England for six years, was a groomsman at the ceromony along with his other sons Romeo and Cruz.

Brooklyn's 10-year-old sister Harper was a bridesmaid at the sprawling $76million estate.

Nicola Peltz is an American actress, 27, and is best known for her role as Bradley Martin on the drama series Bates Motel.

Brooklyn and Nicola announced their engagement on July 11 2020. They got married on April 9.