When will Bryson DeChambeau return to the PGA Tour after surgery?

Bryson DeChambeau has taken to Instagram to provide an update after surgery on his left wrist. 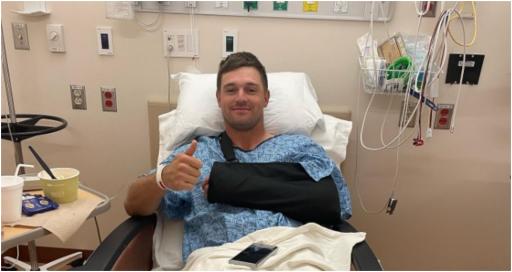 Bryson DeChambeau had surgery last week following his missed cut at the Masters but it appears he is already back to work.

DeChambeau has taken to his Instagram stories and posted a picture with him chilling with his adopted cat Chester. Rumour has it that when he made the adoption last year his slogan for 2022 was: "Do It For Chester".

He's also doing some leg work in the gym and even had long drive supremo Martin Borgmeier round his house doing some training, too.

DeChambeau, 28, ignored doctors' advice to play at Augusta National following a frustrating period in his career with two injuries.

A few years ago he hurt his hip doing long drive training and further aggravated that injury when he "Charlie Brown'd" himself playing ping pong at the Saudi International earlier in the year.

DeChambeau slipped and fell on the marble floor which also made his wrist injury worse. He fractured the hamate bone.

It is now likely that we won't see DeChambeau for a good while. Recovery from this type of surgery typically can last for around 10 to 12 weeks.

A reliable source from Bryson’s camp has confirmed that he adopted a cat named Chester and his slogan for the 2022 Season will be “Do It For Chester” pic.twitter.com/G6ie2i5F5n

Therefore, it has a timeline that could see him miss the PGA Championship in May and also casts doubt on his appearance at the U.S. Open.

DeChambeau was advised by his doctors to rest for four months before the first major of the year but came back after two.

At the Masters, he said: "They recommended that I don't come back for a while.

"They said if you go out and hit golf balls and you feel somewhat comfortable, you consider it, and they are like, you should really let it heal.

"And even Chris [Como, his coach] has told me, you probably shouldn't play, even though he wants me to play obviously, right.

"But he's really looking out for my best interests for the future. I'm like, man, this only comes around once a year, and I've got to give this a go."

He missed the cut and opted for surgery, further posting on Instagram about how the surgery was successful.