Jordan Spieth has revealed his wife Annie played a big role before he claimed his 13th PGA Tour win. 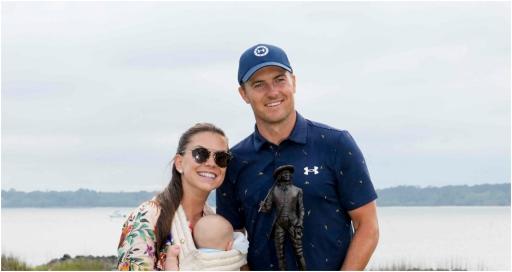 Jordan Spieth credited his wife Annie for helping return to the winners' circle with a key bit of advice she gave him: "Take five seconds".

Spieth, 28, claimed his 13th PGA Tour title on Easter Sunday at RBC Heritage in typical fashion. There were missed tap-ins and ingenious escape acts all week.

The Texan was visibly fuming after he missed an 18-inch putt for par on the 18th on Saturday evening and was stewing over it for ages. Hours.

"I was about as upset after the round yesterday as I've ever been in a golf tournament," said Spieth in his winning press conference.

It was only a week after he missed the cut at the Masters for the first time in his career where Scottie Scheffler claimed the green jacket.

Scheffler also paid tribute to his wife Meredith after he felt like he couldn't cope with the pressure on Sunday morning and "balled like a baby".

But Spieth also revealed that Annie offered some golf-related advice, something that she rarely does according to the former World No.1.

Spieth added. "So, I thought about it today [Sunday]. There were a couple times I was just going to rake it, and I was like, no, I've got to take five seconds."

Three-time major champion Spieth also paid tribute to how being a father has helped his golf.

He said of his five-month old son Sammy: "It just takes your mind off of things and puts it where it should be, which is in the moment of hanging out.

"I really, really enjoyed that. Had a great time spending the mornings with him, and we got our dog here too. It was a blast."

With the win, Spieth also moved back into the Official World Golf Ranking top-10.

Spieth has previously spent 26 weeks at World No.1 in his career and the last time he was inside the top-10 was last October.

Before that, you'd have to go back to the 2018 BMW Championship where he was in the top-10.

Scheffler is the current World No.1.