Bryson believes he and Tiger could "intimidate" Europe at Ryder Cup

Should they both get picked, Bryson DeChambeau wants a partnership with Tiger Woods at The Ryder Cup. 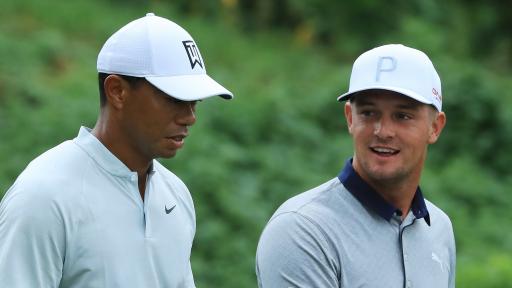 Bryson DeChambeau has revealed how a potential partnership with Tiger Woods at The Ryder Cup in four weeks time could "intimidate" some of the European players.

DeChambeau, who like Woods is sweating on a captain's pick from Jim Furyk ahead of the biennial clash at Le Golf National from September 28 to 30, was asked by the media about the possibility of partnering the 14-time major champion in France.

"It would be an honour to play with him." said DeChambeau, who has become a regular practice round partner of Woods.

"I think we could have some great chemistry out there and hopefully maybe intimidate some people, that would be nice."

The 24-year-old American also explained how captain Furyk texted him congratulations following his hat-trick of career wins on the PGA Tour on Sunday.

"He texted me congratulations, so that was very nice of him," said DeChambeau. "Hopefully I can see him soon."

Does Bryson feel he's done enough to earn one of four wildcard picks in the side? Well, we think so.

"I finished one out of the top 8 [automatic qualifiers]. I won a playoff event. I have had a great year,” he said.

"Would I say it's enough for the captain? That's up to his discretion. Again, it's still one more week."