Bryson DeChambeau confronted a cameraman on Saturday at the Rocket Mortgage Classic after he filmed him for "too long." 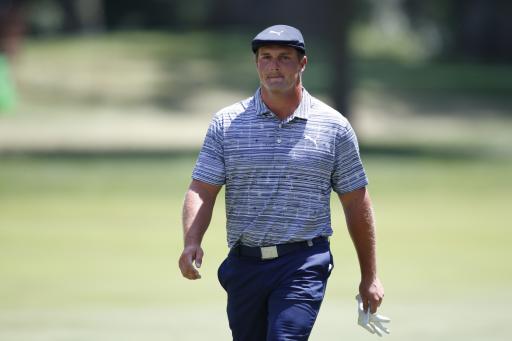 Bryson DeChambeau played some incredible golf in Detroit last week as he picked up his sixth PGA Tour title at the Rocket Mortgage Classic, but he was involved in a pretty controversial incident involving a cameraman on Saturday.

After a troubling 7th hole which led to DeChambeau taking some frustration out on the sand, the 26-year-old confronted a cameraman on his way to the next tee.

Bryson running a little hot. Caught up with him on 7 where he took a Sergio slash at the sand after splashing out of a greenside bunker, muttered an expletive after missing the par save and spent 60 seconds in a...testy discussion with a cameraman on his way to 8 tee. pic.twitter.com/ENjQt1U689

Following his round, DeChambeau was asked about the incident by Golf Channel and the 26-year-old explained that he didn't understand why he was being filmed for so long over something that could potentially "damage his brand."

"He was literally watching me the whole entire way up after getting out of the bunker, walking up next to the green," DeChambeau said. "And I just was like, ‘Sir, what is the need to watch me that long?’

"I mean, I understand it’s his job to video me, but at the same point, I think we need to start protecting our players out here compared to showing a potential vulnerability and hurting someone’s image. I just don’t think that’s necessarily the right thing to do.

"As much as we’re out here performing, I think it’s necessary that we have our times of privacy as well when things aren’t going our way. I mean, we’re in the spotlight, but if somebody else is in the spotlight they wouldn’t want that either.

"I feel like when you’re videoing someone and you catch Tiger (Woods) at a bad time, you show him accidentally doing something, or someone else, they’re just frustrated because they really care about the game. It could really hurt them if they catch you at a potentially vulnerable time.

"We don’t mean anything by it, we just care a lot about the game. For that to damage our brand like that, that’s not cool in the way we act because if you actually meet me in person, I’m not too bad of a dude, I don’t think."

The incident caused a huge stir on Twitter and it's safe to say that the majority of golf fans sided against DeChambeau on this one.

I want to like @b_dechambeau but he makes it impossible. Another Reed

He should put some time into improving his personality as well as his golf game.

If anyone had doubts about him before they won’t now. He just proved himself a complete jack wagon. He’s playing in a televised event. There is no privacy for your actions. He’s accountable and has to answer for them instead of this double talk drivel.

This guy's complaining about cameras what's going to happen when the fans are back and he can't get away from anything they will see all.

Really wanted to like him after his NCAA 2015 success and walking as a volunteer along side him at Concession, then saw another side of him after he played poorly in Crans Sur Sierre, Switzerland 2016 ...tried to give him a cheerful wave as he sneered in return. Big Baby Bryson

This kid is an absolute punk! He eats a few steroids and suddenly he's GOLFZILLA! Quickly becoming one of the most despised players on the tour by his peers.

NEXT PAGE: How much Bryson DeChambeau and every player won at the Rocket Mortgage Classic...