Bryson DeChambeau got through to the next stage as one of the longest hitters at the Professional Long Drivers Association's World Championship. 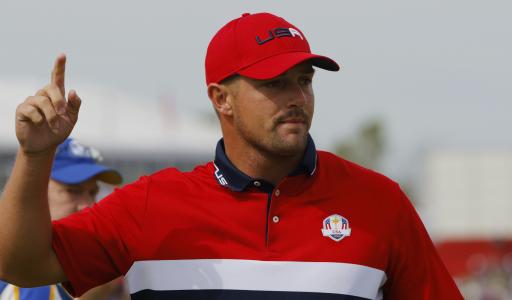 Bryson DeChambeau made an impressive debut at the Professional Long Drivers Association's World Championship, hitting a 412-yard drive on his way to qualifying for the Final 64.

Having won the Ryder Cup with Team USA at Whistling Straits at the weekend, DeChambeau jetted off to Mesquite, Nevada to play in his first Long Drive Championship.

There were five groups on day one, each of which includes 16 contestants. Bryson found himself in Group 3 alongside the likes of Scottie Pearman, Jim Waldron and Spencer McDaniel.

Each player hit six drives in five different sets, totalling 30 drives each. The top 12 from each group on Tuesday advanced to the Final 64, while the 13th place in each group plays in a wildcard match.

RELATED: RORY MCILROY: "IT SUCKS BUT IT MAKES GETTING THE RYDER CUP BACK EVEN SWEETER"

Although DeChambeau is the biggest hitter on the PGA Tour, he has not competed in this sphere before. But he looked at home in the desert and his performance showed it.

Sunday: Win the Ryder Cup
Tuesday: 412-yard bombs in a long drive competition@B_DeChambeau's having himself some fun. pic.twitter.com/fVnWwvU93s

With the fourth drive of his fourth set, the 2020 US Open champion smashed his longest drive of 412 yards. This earned him a valuable 200 points to help him finish second behind Pearman in the group.

Pearman was one of only two players to hit a longer drive than DeChambeau in Group 3. Josh Cassaday hit the longest drive in this group of 417 yards.

This is the same length that the eight-time PGA Tour winner hit one of his drives during the Ryder Cup, which was one of the best shots ever witnessed at the tournament.

On Wednesday, the top eight from each group will advance to the Final 32, with the Top 8 from each group progressing on Thursday. The final will then take place on Friday.

DeChambeau engaged with the crowd and got them excited in Mesquite and they will be even more excited to see how he fares in the next round on Wednesday.