Cameron Champ won his second PGA Tour title by claiming the Safeway Open. Check out what clubs he had in the bag to do so. 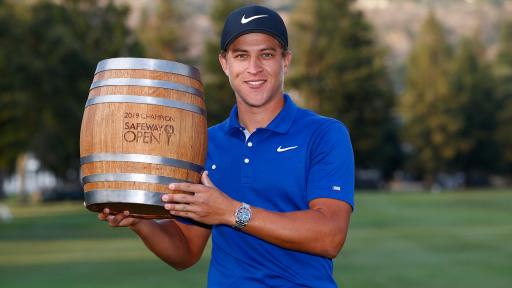 Cameron Champ won his second PGA Tour title of his career on Sunday, claiming the Safeway Open at the Silverado Resort and Spa's North Course.

With one hole to go, Champ needed a birdie on the par-5 18th hole to win, after Adam Hadwin tied the lead with a birdie at the last. With the pressure mounted on his shoulders, Champ stepped onto the tee and ripped a 369 yard drive down the middle of the fairway.

The 24-year-old left a three-foot birdie putt, which he tapped in with confidence to win this year's Safeway Open. It had been an emotional week for Champ, as his grandfather, Mack, is currently in hospital battling stomach cancer.

After sealing his victory, Champ embraced his caddie before bursting into tears and hugging his father, Jeff, on the 18th green. Champ's grandfather, who was watching on television in hopsital, was the man who introduced the young American to the sport.

"For me to do something like this, for me to win, and for him to be able to witness and watch on TV, I know he was probably amped up," Champ said. "For him to be able to see me make that putt on 18 on the 72nd hole, that will go down as the greatest moment ever in my career.

"It was just kind of meant to be. Everything fell into place."

Champ went into Sunday's final round with a three shot lead, which was closed down by Hadwin after he put together an excellent round, but Champ kept his composure to card a three-under score of 69, to finish 17-under for the tournament.

After speaking with his father on the green, Champ was then handed a mobile phone, where his grandfather was waiting on the other end to congratulate him.

"With everything going on with my family, with my grandpa, I wasn't sure if I was even going to play," Champ said. "I showed up Thursday and teed it up with no practice round, nothing. The whole week there was nothing else on my mind. It just kind of blurred everything else."

Cameron Champ - What's in the bag of the Safeway Open winner?