TikTok golf cart sensation Cassie Holland reveals one of the most shocking things she has ever seen happen on the job. 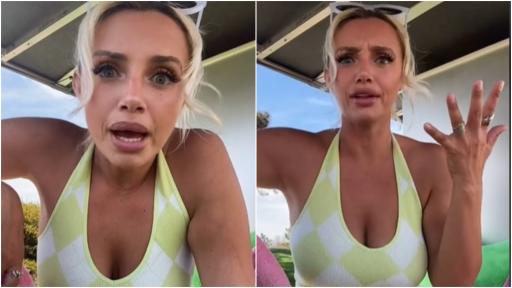 TikTok golf cart sensation Cassie Holland has taken to the social media platform to reveal the shocking actions of one particular golfer while she was on the job out on the course.

Cassie, who has a whopping 1.6 million followers on TikTok along with 38 million page likes, revealed how one golfer decided to relieve himself right next to her golf cart while she was handing out beers to the group.

The video has now had just shy of 4 million hits.

Cassie couldn't help fire a cheap shot at the end.

"I am a bit taken aback by what just occurred," says Cassie.

"So I drive up to these golfers as usual, there's like a tree on this side and then they're in their cart on this side, and they want some drinks. So I hop out of my cart to see what they want and then I think 'wow, what's that running sound of water, is my cart leaking a lot of water?'

"So I look round at one of the guys by the tree, and I see him peeing by my cart. I was like 'oh'. I mean he was facing the other way peeing down the hill but I was so caught off guard.

"All of his friends knew he was just standing there peeing, and they are just acting normal and ordering the drinks, and I'm getting the drinks.

"He's just over there still going, and it's just so awkward because no one is addressing it and it's like 'I'm a lady.'

"Not to mention there is a warning on every cart that specifically tells you not to pee outside because you could be fined for it actually and if you are caught doing it by authorities you can get actually charged as an SO because there are families that live on this course and you don't want that. So it's like what the hell, it's just so carefree.

"I know if you've gotta go, you've gotta go but they had just passed a bathroom on the last hole, that's the thing. Like he didn't have to go and then all of a sudden he couldn't wait? Maybe he just really wanted to feel that breeze...

"But anyway, when he was all done he came over and ordered more beers with his friends, and I was like placing them down and not handing them to him directly because you know, I don't want to touch hands.

"Then his friend, the one paying gets his card out and then the PP guy is like 'oh no, let me pay for them'. In my head I'm like 'oh please no'. So I just quickly reach for the guy's card, like I don't want your money, I know where those hands have been. I know people don't always wash their hands but it's just different when you see it right in front of you.

"So luckily his friend paid but then it gets worse. So surely they feel bad that I pulled up to their friend peeing, which was awkward AF, so they will be nice and give me a good tip, right? No... he tipped me two dollars. Are you kidding? Well, what if I just decided to tell on them? I nearly saw your friend's you know what. That was so rude, what does he thinks this is? A dollar per inch?