Did Tiger Woods break any golf rules in this CLASSIC TV advert?

This is one of many classic adverts that Tiger Woods has done over the years, but does it bring up a golf rules dispute? 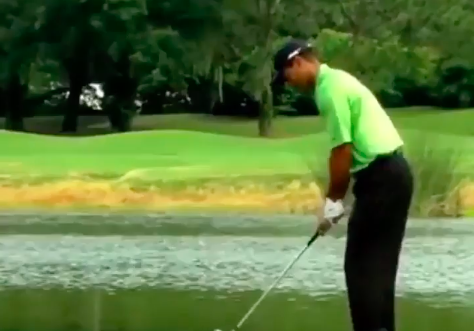 Tiger Woods has proven that he can do many things on the golf course. He can chip in from impossible angles, he can hole putts from anywhere and he can win tournaments when everything is against him.

This classic advert below also shows that he can walk on water and still find the cup. This great footage from a commercial Woods took part in with EA Sports in 2008 sums up his powers on the golf course.

However, as golfrules_questions points out, Woods inadvertently caused an interesting rules dispute which may be useful to golfers who watch this video.

By all means, if your ball is on a lilypad in the middle of a lake and you are able to walk on water, then go for it. But what the 15-time major champion does when he gets to the ball is interesting.

The 45-year-old dips his club into the water to clean it before he hits his shot. So the question is: if your ball is in a hazard area, are you allowed to clean your club in the hazard?

The answer is yes, so Tiger has not broken any rules. You are allowed to clean your club in the penalty area, as long as this is not affecting the ball or causing it to move.

This situation refers to rule 17.1b. In a penalty area, you are also allowed to move loose impediments, ground your club and take practise swings that touch the ground.

These are essentially the same rules that apply if your ball was in the middle of the fairway. As long as you don't cause the ball to move, there is no penalty.

Woods has not improved the conditions of his situation. However, it must be stressed that you should not attempt to reach your ball as Tiger does in the video.

This activity is only meant for super-humans.

NEXT PAGE: IAN POULTER HITS SHANK WITH HIS FIRST SHOT AT THE DP WORLD GOLF DAY!