Did you know this rule about hitting your ball in MOVING WATER?

There are many specific and hidden golf rules that many people don't know about, but did you know this one? 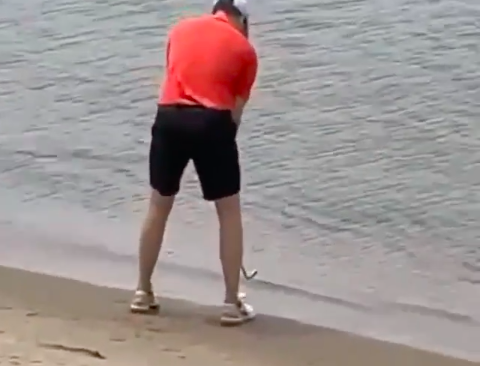 It is important to soak up as many golf rules and as much etiquette knowledge as possible so that you can play every round as easily and stress-free as possible.

However, you are faced with so many different scenarios and situations in golf and it is impossible to be aware of every single rule and every page of the rulebook.

One golfer was faced with a strange scenario recently where his ball finished on what appears to be a beach and on the edge of the tide moving in and out of the shore.

As he stood over his ball, his ball was moving in the water and this begs the question: Are you allowed to hit your ball while it is moving in water?

The answer is: Yes. A golfer is allowed to hit a ball while it is moving in the water. It is up to the golfer whether he chooses to do so, even though this could be a very difficult task.

The player is entitled to take relief under Rule 16.1 or Rule 17. It is unlikely that you would ever find yourself in this situation, but as we can see, it is definitely possible and anything can happen in our wonderful sport.

Rule 16.1 refers to abnormal course conditions such as animals holes, ground under repair, temporary water and immovable obstructions. As the moving water affected the player's stance and it is immoveable, you are entitled to relief.

Although the player has found himself in a very bad position, presumably as a result of a poor shot, he is entitled to know the rules and you should know when and where you are allowed relief.