Did you know this rule about STANDING out of bounds with your ball in play? 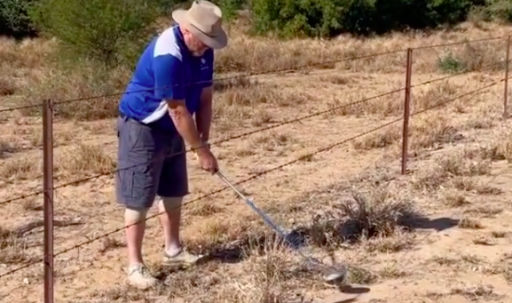 Here at GolfMagic, we want to keep our readers and golf fans informed about the rules of golf to make your game as enjoyable and as easy as possible.

A video was recently posted on social media that showed a man faced with a very awkward shot and it posed a significant question as to what he was allowed to do.

The man found his ball in some wasteland that was extremely close to a fence that marked the out-of-bounds area, but his ball was safely in play on the right side of the fence.

But as a right-handed player, the man was required to stand on the opposite side of the fence where the out-of-bounds was, but are you allowed to stand in such a position to play your ball?

The answer is definitely yes. As long as the ball is in bounds, you may stand out-of-bounds to make a stroke and you will not incur any penalty or break any rules if you do this.

As you can see in the video, the fence that the man is faced with is very sharp as well, which makes the shot even more awkward and difficult for him.

However, the man followed the rules correctly and took his shot while standing in a position that his out-of-bounds. By the looks of the terrain that he is standing on, his ball was lucky not to find itself on the wrong side of the fence.