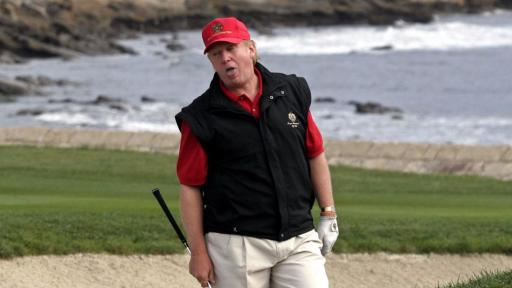 A new book written by Rick Reilly titled Commander in Cheat: How Golf Explains Trump has documented a number of examples where the United States President Donald Trump has "cheated" when it comes to playing golf.

Master the chip and run

With quotes from Tour professionals and caddies who have seen first-hand what Trump - apparently off a 3 handicap - is really like on the golf course, the book addresses a number of times when Trumphas put down the wrong scores on his scorecard and improved his lies from the rough to the fairway.

It is estimated in the book that Trump has played more than 150 rounds of golf since taking office, despite the fact he has only logged one round in the online USGA Handicap Index and that was a 96.

''In golf, he's definitely not exonerated,'' Reilly told The Associated Press. ''There's been dozens and dozens of people that can declare him guilty of cheating."

One particular time the issue of cheating arose was in a recent game between Trump, Tiger Woods, Dustin Johnson and Brad Faxon. The latter of which is quoted as saying: ''You've heard so much about it [cheating], it's almost like you want to witness it so you can tell the stories."

According to Reilly's book, Trump was accused of cheating by players, caddies and Secret Service agents of moving his ball at any opportunity he could to improve his lie on the course. One instance took place at Winged Foot in New York, the only non-Trump property where the President is a member.

''The caddies got so used to seeing him kick his ball back onto the fairway they came up with a nickname for him: 'Pele,'" writes Reilly.

In fact, Bryan Marsal - the chair of the 2020 US Open to be played at Winged Foot - told Reilly that Trump began one game with him as a partner by warning: ''You see those two guys? They cheat. See me? I cheat. And I expect you to cheat because we're going to beat those two guys today.''

Sports commentator Mike Tirico says Trump once threw his golf ball off the green and into a greenside bunker, while boxer Oscar De La Hoya said 'The Donald' cheated against him twice in two holes.

Then there was also the time where course etiquette came to the fore when Trump appeared to drive his buggy over the corner of a putting green - WATCH HERE.

Reilly also explains why he undertook the project of writing this book because of Trump's ''whopper'' - repeated over the course of the campaign and in the White House - that he won 18 club championships.

According to his research, he coud not locate a single victory for Trump in any club championship. He also found the President's tally included at least one in which Trump never played on the course that day, and 12 that were "actually senior or super senior club championships.

Reilly, who has a handicap of 5, said he's issuing Trump a challenge to defend his reputation in a match on a course that he doesn't own refereed by officials - offering $100,000 to the charity of the President's choice.