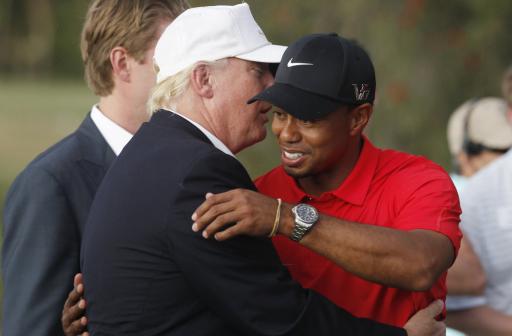 Donald Trump has offered his support to Tiger Woods after he was posed questions by the media about the pair's relationship last week.

Woods, who tied for 40th at The Northern Trust on Sunday, was quizzed about his relationship with the United States President by a reporter from the New York Times.

"I've known Donald for a number of years," Woods said. "We've played golf together. We've had dinner together. I've known him pre-presidency and obviously during his presidency."

Woods was asked a follow-up question about his relationship with Trump in light of some of the president's policies on immigrants. Woods responded in part, "Well, he's the President of the United States. You have to respect the office."

The former world number one was then asked if he had any comment on the state of race relations in the United States, to which Woods answered: "No, I've just finished 72 holes and I'm really hungry."

In light of the questions, Trump sent a tweet to his 54 million followers on Monday morning applauding Woods for how he handled the subject.

The Fake News Media worked hard to get Tiger Woods to say something that he didn’t want to say. Tiger wouldn’t play the game - he is very smart. More importantly, he is playing great golf again!

Woods tees it up this week at the Dell Technologies Championship at TPC Boston.