Dustin Johnson holds a five-shot lead heading into Monday's final round of the Tour Championship at East Lake. 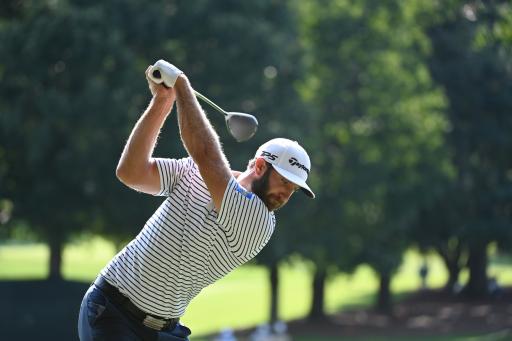 Dustin Johnson could finally be getting his hands on the FedExCup as he goes into Monday's final round of the Tour Championship with a five-shot lead at East Lake.

During Sunday's third round, Johnson equalled the lowest score of the week, shooting a six-under par round of 64 to reach 19-under for the tournament, with Justin Thomas and Xander Schauffele his closest challengers at 14-under.

Johnson went into the third round just one clear at the top and started his round with two pars, before a birdie at the 3rd hole extended his lead to three strokes, with Sungjae Im making bogey on the same hole.

Thomas, who won the FedExCup back in 2017, rolled in a brilliant 30-footer to save par at the 5th and and followed that up with a 20-foot putt for eagle at the par-5 6th.

Johnson only managed a disappointing par at the 6th, but made birdies at the 7th and 9th to go four ahead at the turn.

What bunker?@DJohnsonPGA hits the closest tee shot of the day at No. 9.#QuickHits pic.twitter.com/x8p1EE2tQK

The 22-time PGA Tour winner then rolled in a 20-foot putt for birdie at the 10th, before dropping his only shot of the day at the next when he missed a six-foot putt to save par.

It was back to business for Johnson at the 12th though as he sunk a 25-foot putt from the fringe of the green to make birdie, before adding two more at 14 and 18 to finish six-under par for the day.