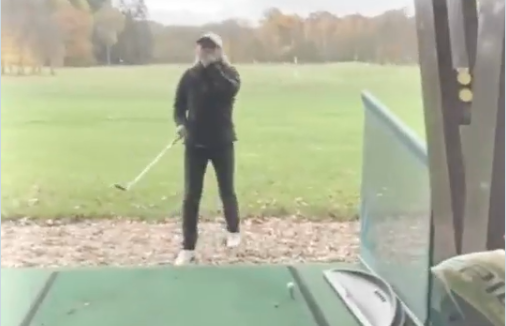 Maggie Whitehead is one of many up and coming talents in English golf and she has proven this in more ways than one ever since she was a young child.

Maggie first appeared on the national golf scene when she won the US Kids Golf British Junior Championship at Woodhall Spa at the age of nine.

Skip forward to July 2021 and she won the English Girls under-16's Open Amateur Championship. She is now part of the England Girls Squad and coached by John James Vallely.

She competes nationally and internationally and has a bright future ahead of her. By the looks of her social media posts, she appears to have great fun in her practice sessions.

In her most recent post on Twitter, she is on the driving range and she attempts an amazing trick shot. Her aim is to slice underneath the ball on the plastic tee with a one-handed swing, without moving the ball from the top of the tee peg.

Her right arm swoops down and perfectly goes under the ball and over the tee. The ball incredibly stays on the tee and she had completed what she described as "her best trick shot ever."

She tagged Rachel Gourley in the video, a fellow England player, and they were both in shock as Maggie performed the trick shot to perfection.

RELATED: FROM MONDAY QUALIFIER TO MILLIONAIRE! THE MAGNIFICENT STORY OF STEVEN ALKER

The slow-motion replay of the connection of the club makes the trick shot all the more impressive. The girls' reaction says it all as well.

To perform such a tough challenge, you need a great swing and a great understanding between club and ball. So far in her career, Maggie has proven her ability to do this in abundance.

NEXT PAGE: "IF ANYBODY NEEDS ME I'LL BE ON MY COUCH": JUSTIN THOMAS SHARES HIS HAPPY PLACE