"If anybody needs me I'll be on my couch": Justin Thomas SHARES his happy place

It appears the 28-year-old likes to relax in style... 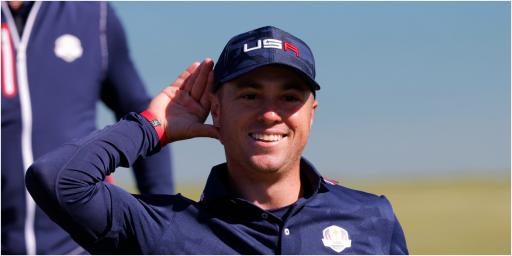 PGA Tour star Justin Thomas does not often get much time to relax, but when he does it's in style.

The 28-year-old has often spoken about how when he gets time away from the game he enjoys nothing more than vegging out, watching the football and not thinking about his game. And by the looks of it, five screens is enough for Thomas to get his sports fix.

He shared his baller set-up on his Instagram page which showed him watching the Houston Open, the Pelican Women's Championship, Formula One and also Sunday night football. That's not a bad way to relax.

Thomas opened up on tour life this week when he spoke to the popular No Laying Up podcast. He discussed his frustrating 2021 which saw him struggle after picking up an early win at the Players. He talked about how he got Jim "Bones" Mackay to ditch his microphone and carry once again.

It also was revealed he is a regular visitor to Tiger Woods and sees him at least two or three times a week at his home in Jupiter, Florida. Naturally, Thomas did not go into full details about the status of Woods, but he said he knows that the big cat will "at least try again" to play golf. Thomas also spoke about his issues with poor mental health in 2021. He said he felt like he wasn't allowed to feel sorry for himself as he wasn't enjoying the game and not getting out what he was putting in. Now he feels better, he said.

In the fall swing, Thomas has finished 18th at the CJ Cup at Summit as Rory McIlroy claimed his 20th PGA Tour win. He followed that with a third placed finish in Mayakoba, Mexico.

MORE: HOW MUCH DID EACH PLAYER WIN AT HOUSTON?

MORE: THREE LAMBOS GIVEN AWAY ON LPGA TOUR

NEXT PAGE: DARREN CLARKE GETS TIPS FROM VIJAY SINGH