The four-time major winner has been out of sorts for quite some time. 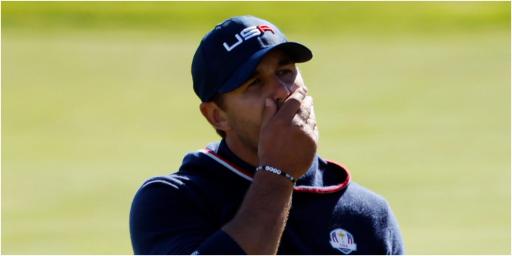 Something is not quite right at the moment with Brooks Koepka.

Another missed cut on the PGA Tour in Houston was his second in a row in the fall swing. At Mayakoba in Mexico he told us he was a range rat and that he couldn't get enough practice. But the range rat has not found a formula for consistency and good ball-striking of late.

Then last week the PGA Tour showed us footage of Koepka working on his driving long into the night. Swing after swing and pounding those range balls to the moon.

We could be forgiven for thinking Koepka is merely being more visible, or at least been told to be more visible because of the player impact program and the fact that he has a big match coming up against frenemy Bryson DeChambeau.

RELATED: BROOKS DOESN'T CHECK WHO HE IS PLAYING WITH

But before he played in Mexico a few weeks ago he told us how he feels like he has "no control" over the clubhead and how he doesn't exactly know where his swing is.

This appears to be a common problem for Koepka. He does get injured a lot, and there are times where it feels like he's in crisis. But this usually is followed with another win.

Trevor Immelman, 41, the 2008 Masters champion and now analyst on Golf Channel gave us his thoughts on 31-year-old Koepka as he watched him struggle over the weekend.

Immelman explained that he thinks Koepka is "at odds" with his swing and just trying to "figure out a little something", explaining: "For me, it looks like his lead arm is much higher than usual at the top of the backswing."

Koepka broke an 18-month winless streak in February when he won the Waste Management Open. Good performances in the majors followed but he couldn't add to his tally of four. Since then, it's gone downhill.

Immelman added: "Well, when you're that good, you're just looking for something small and all of a sudden things can change.

"As soon as you can get a feel for where that clubhead is in your downswing and you can start to get it to kick out in front of your body at the right moment, with that clubface nice and square, then your confidence slowly but surely starts to build.

"When you're somebody of that caliber, he can jump on it pretty quick. But struggling right now. Really has been poor ball-striking for quite some time."

MORE: DECHAMBEAU SENDS ONE TO THE MOON AT TOP GOLF