It was a daring shot that had very painful, but entertaining consequences. 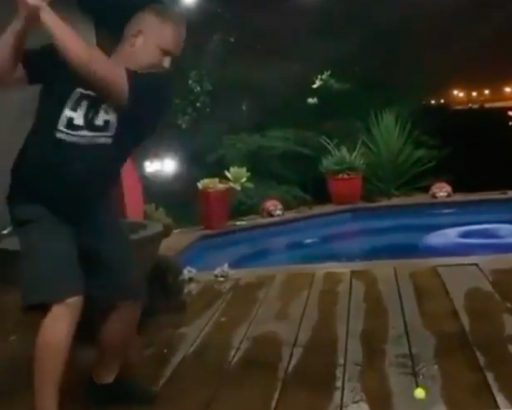 The shot usually produces a low, piercing ball flight. It is personally one of my favourite shots to watch on the PGA Tour because the players can usually hit the shot to perfection.

However, it doesn't always go to plan when non-professional players have a go. Especially when they are trying the shot with their ball sitting on a wet piece of wooden decking.

This was the situation in the video below which was posted by long.drivers. A man put his ball down on the moist surface and he prepared to hit it over a swimming pool and into the night sky.

RELATED: DEBATE: WHAT WOULD YOU CHANGE IN GOLF? GOLFMAGIC READERS HAVE THEIR SAY...

He took a full backswing and as his clubhead accelerated down towards the ball, his right foot slipped and this was the point of no return.

The man fell over and landed on his back, but appeared to be unscathed from his crashing descent. I don't think he'll be trying that shot in that environment again any time soon.

Ironically, the golfer struck the drive really well and because he fell, he was unable to see his yellow ball fly high into the sky.

There is an inevitability about the shot. Before he takes aim, you can tell an accident is on the horizon when you notice the wet floor beneath his feet.

It sounds as though he was with friends when he hit his shot and they all shared a laugh at the golfer's crashing fall. It goes without saying that we do not advise you to try this shot at home.

NEXT PAGE: BROOKS KOEPKA "DIGGING THE DIRT" AHEAD OF THE MATCH WITH BRYSON DECHAMBEAU